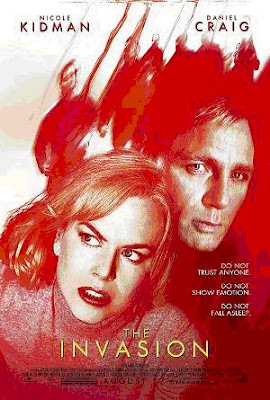 How many times have we seen “The Invasion Of The Body Snatchers” remade? What was once considered a perfect analogy for the infiltration of communism in America during the “Red Scare” during the McCarthy era, has been made, remade, rehashed, updated, tweaked, re-released, and any other kind of euphemism since ever since the original 1956 movie. If I may be so forward, I think the story has played itself out. Without the back drop of the ever impending communist who can blend in with the capitalistic society in the United States, who can act like us, talk like us, go to the same schools, walk through our church doors, and who can drink anything other than vodka, the real meaning of the story has been lost on us. Even taking the story in the strictest Sci-Fi sense of “anyone could be an alien”, this storyline is about as tired as the Mutant Registration Act is to the Marvel universe.

Directed by Oliver Hirschbiegel (“Downfall”) and written by David Kajganich (hasn’t done anything else), “The Invasion” feels like a cross between a zombie movie, “War of the Worlds”, and I’m sorry to say that it has just the hint of “The Happening”.

After the crash of US space shuttle “Patriot”, people start becoming infected with an organism that takes over their body during their sleep. Of course, no one really knows about this until it becomes so out of control. These “body snatchers” are devoid of high levels of emotion that we humans feel. As the invasion increases in the number of infected, we see that the result of it being a new era in peace and prosperity. Carol Bennell, played by Nicole Kidman (“Eyes Wide Shut”) wants to screw all that up. With the help of her doctor friend; Ben Driscoll, played by Mr. Pouty himself Daniel Craig (“Layered Cake”) they want to try and stop the take over of the human race by this outside alien force. The two discover that some people are immune to the virus and it just so happens that her son is one of them. Carol must find her son who is being held by her ex-husband, who also just happened to be the first infected, and rescue him to take him to a military lab. The aliens, however, are trying to root out people who are not infected yet. The aliens are bland and emotionless creatures so they resort to things like throwing people off buildings to see who in the crowd react. Carol must walk through the city and try to hide her emotions to get to her son. I do have to say, if you need someone to act emotionless and with as little passion as possible, Nicole Kidman is the perfect choice for the role.

It almost begrudges me to say that I kind of enjoyed the movie. It was nice to see a modern alien invasion happen that doesn’t involve huge space ships blowing up everything. The aliens do feel like an opposite zombie-like creature. Of course there is a lot of running involved. The action is really decent for the flick which is kind of surprising seeing the Nicole Kidman is in it. This is also probably the best role Daniel Craig has been in. He can pout all he wants without destroying everything that makes James Bond James Bond. Of course there is a message in here but it’s not as smack-you-in-the-nose obvious that “The Happening” was. Mankind can only be mankind with the possibility of violence and war and all the bad things we do. I guess the final message of the movie is “Is it worth it?”. If that’s the case, I don’t think this movie really made it enough. You see news clips throughout the movie of the changes like President George W. Bush meeting with Venezuelan president Hugo Chavez, the end of the Iraq War, and other peace in our time events. One of my main problems with the movie is that you cannot really tell how much of the world has been infected. You have Bush infected but there’s a military lab/outpost that is still trying to find a cure. You have a whole, large city infected but there is a quarantine/road block established. The main ending is kind of nice to see but it’s a complete departure from the source material. To summarize, a bland, emotionless Nicole Kidman must act bland and emotionless, aliens want to take us all over, and mankind sucks. Now go have fun at the movies!
Posted by Film Geeks at 11:32 AM No comments: 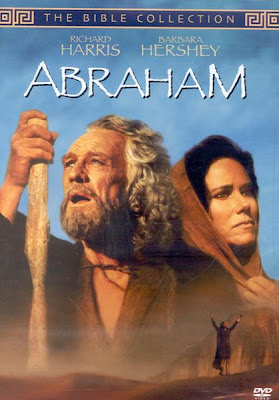 The Bible Collection has been a personal favorite of mine after watching “Joseph – The Bible”. Even the lesser ones have a decent amount of drama and a well written and well paced storyline. Also, for the most part, the story stays with the source material. That’s The Bible for all you heathens out there. Believers and non can enjoy these movies for being well produced, dramatic stories that at least make you appreciate what these real life people may have went through. However, one of the main problems I have with this series is that the writers seem to make the central figures a bit too human. What I mean by that is that by taking a lot away from the “religiousness” of what makes these people inspirations, the writers tend to weaken the characters to a point where it’s almost laughable that central points and peoples hinged on what they did and what hey stood for. “Abraham – The Bible” probably illustrates this point most of all.

Directed by Joseph Sargent (“Miss Evers’ Boys”) and written by Robert McKee (“Mrs. Columbo), the story follows Abraham, played by Richard Harris (“Gladiator”) from his days before being called by God to father “a great nation” that would become known as Israel and goes through leaving his home to establish a new one. Along the way he and his wife; Sarah, played by Barbara Heshey (“The Right Stuff”) must deal with forsaking the old, false gods, the birth of the Arab nation with the birth of Ishmael, the destruction of Sodom and Gomorrah, and building up a people that would be counted like the “grains of sand”.

The visuals of this movie are very banal. Usually this series has a certain “olden day” like feel to it. Abraham taking his people through the desert and meeting Mekhizedek feels like they just took twelve people and made them wander just outside the deserts of . On top of that, the number of people in the cast lack any impressiveness. Yes, it is suppose to be Abraham’s early days but the feel to the movie is that there’s an old guy who wants to leave his home and takes about a dozen people with him and that’s about it. There are no impressive cities or landscapes that other “The Bible” movies have. It’s a very lackluster visual exercise.

Abraham is also a very boring character which is sad because with talent like Richard Harris, I thought I’d feel more…well, feeling for this important figure head of a great people. Abraham appears just as a crazy old coot when he is smashing the false idols in his original home. His visions when God is talking to him makes him to be more a mad man than someone who the Almighty had conversations with and who was so impressive that the Creator made him this patriarchal man. Both and Sarah feel like very distant secondary characters even though they play a huge role in the real story. The acting of everyone in this movie just feels off from what it should be. In fact, the best acted and most interesting character in the whole movie is actually Mekhizedek; and he’s really not in The Bible all that much! The almost sacrifice of Isaac did not invoke a lot of emotion. Usually with this specific series I usually shed a tear or two. However, this movie made me yawn more than inspire me or fill me with awe. If I knew nothing about the real Abraham I would have had a really poor view of him after viewing this movie. This is probably one of the movies in the series you might want to skip.