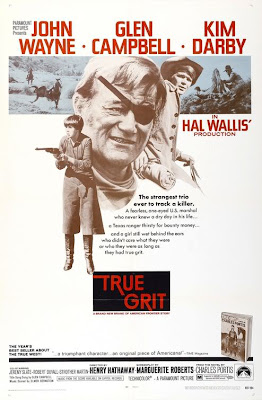 Kirk Vs. Picard. Mike Vs. Joel. Twilight Zone Vs. Outer Limits. In the media field, you can have a face off with just about every aspect of really anything. In the western genre, it seems to be Clint Eastwood Vs. John Wayne. Personally, I think that each offers something different and unique. Where Eastwood offers more the dark and antihero type character, John Wayne embodies more that all American who helped to tame the West. The tall and larger than life man who stood for law and order was hardly ever viewed as an antihero. Even in “Stagecoach” (which is my personal favorite John Wayne movie) where he played Ringo Kid, he was more the misunderstood outlaw. Every other movie he was in, he was the hero. However, in “True Grit”, Wayne becomes an antihero who is a slob and drunkard and who is almost a bumbling fool. It's a different role for “The Duke” which adds to his showcase of a career that was more than just a one trick pony.

Tomboy and girl older than she should be, Mattie Ross (Kim Darby) is seeking justice, and maybe a little vengeance, on the man that murdered her father, the coward Tom Chaney (Jeff Corey). After claiming her father's body, Mattie searches for a US Marshall who has “grit”...”true grit”. She finds her man in Marshall Rooster Cogburn (John Wayne). He's a rough, unsavory, whiskey drinking, slippery morals, old, and fat stature of a man. However, if anyone is going to track Tom Chaney into the Indian territories, especially when he throws in with the rough and wild Ned Pepper (Robert Duvall) gang, it's Rooster. Mattie is going to have a heck of a time with everything. She has to settle her father's affairs, talk Rooster into taking her with him, try and keep the Marshall sober enough. Plus she has to contend with a Texas Ranger by the name of La Boeuf (Glen Campbell) who wants to take Tom Chaney back to Texas to hang for the murder of a senator. Mattie only has her families money, her wit, and her brandishing the name of a prominent lawyer, J. Noble Daggett to help her in her quest. With good dialog, some good humor, and gunfights and horses; “True Grit” is a credit to the Western genre.

This is such a good movie. This is more of a character driven Western than an action one. Mind you there is some good action in it, so this balance of action and characters makes for a good Western. One of the most surprising aspects of the script is how much humor is in it. John Wayne tends to carry most of the great lines but young Kim Darby gets her licks in. Darby as Mattie is wiser and older than she should be and I love those types of characters (see “Juno”). Mattie is a strong willed woman who doesn't let her age or her fear get in the way; or lets anyone else try to muscle her over. She is still lady like in that she knows she's a woman, or at least a teenage girl who has to grab at womanhood quickly. Mattie's age is never revealed to us and her appearance does make it difficult to tell; this does add to a rather creepy scene with La Boeuf though. She's always out to prove to others, especially Rooster, that she can ride and muscle through with the men.

John Wayne plays a very interesting characters in Rooster Cogburn. Rooster comes from a checkered past and carries some scars to prove it, along with a patched eye. He's a drunkard and not always the most honest man. I think this is where the movie probably faults the most. Barring one scene, Rooster seems to be able to function just fine, especially with weapons, with the most sober characters. I don't think the movie did enough to portray Rooster as such a lush. Yes, he drinks a lot and there is that one scene, but he doesn't seem to let what should be clouded judgment and skills take hold. I don't know if this is due to the script, director, studio, or actor; but Rooster seems to be doing alright for himself. The biggest thing Wayne brings to the table here is just how funny he can be. The script is smart and the jokes are funny. Cogburn gets a lot of zingers in and is also subject to a few. Wayne doesn't seem to mind being made fun of his age or weight (not that he was obese by any means) and considering this movie was made about ten years before his death he's really quite in his element. It's no wonder he won an Oscar for his role here.

The biggest annoyance comes from Glen Campbell as La Boeuf. He can be annoying at times, but he seems to be there just to be made fun of. With exceptions to a few scenes, if you took him out of the movie altogether, you'd never notice it. I think the fault comes in the choice of actor. Campbell doesn't seem to be able to take on the qualities that the character is described of having. For example, Mattie tries to convince Rooster that La Boeuf will cheat him and for proof he's got a smirk on his face. Campbell is void of any smirk whatsoever. Originally, Elvis Presley was considered for the role but turned it down, and I don't think he really could have done better. Throughout the movie, he's always coming off as the guy waiting to take advantage of the situation if Rooster or Mattie let their guards down – at least that's the impression I get from every character but Campbell's. He's not without his good moments and the character is a fun target for Rooster and Mattie to poke at.

Tom Chaney doesn't really have much screen time here but towards the end of the movie, he does something which is very out of character to him and seems to come out of nowhere just for the ending to have a small twist. Duvall as Ned Pepper does a decent job too but there isn't a lot of time spent with him also. It's an odd character because in one scene he is leaving one of his young followers who helped saved him behind and in the next he's keeping a promise to Rooster and protecting Mattie. Be on the lookout for a young Dennis Hopper too!

This is such a fun movie. The scenery of Colorado make for a great picturesque backdrop to a well written Western. Rooster and Mattie have great chemistry and whit in their characters. It's fun to see a strong female lead on top of a young lead. Rooster's grizzledness and by-any-means-necessary attitude lend to some great action with a fun character. On top of that, the ending is very good. I was surprised at what exactly happens at the end. It has some joy, some sadness, and overall resolution. It makes for a very believable ending in a genre where many people seem to repel bullets. When watching, see which character really does have “true grit” and you'll find yourself watching a very enjoyable Western.
Posted by Film Geeks at 12:29 AM 4 comments: