Episode Notes: THE GEEKS ARE BACK! A tale of where they have been, what's been going on, a re-introduction...and then they blast Hollywood for the lackluster line up! 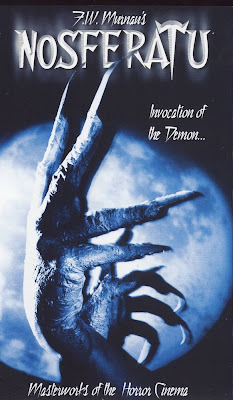 Ever since the advent of movies, filmmakers have loved making horror movies. One of the first most influential horror movies was “The Cabinet Of Dr. Caligari (1920). If you believe that filmmakers back then just shot anything because it was a new technology to make money, then you haven’t seen some of these old classics. Where this movie launched a generation of horror movies to follow, “Nosferatu” took a more realistic and therefore scarier look at what the horror genre could do for the budding movie industry.

Trivia note: “Nosferatu” was so scary, that in Sweden it was banned for “excessive horror” …until 1972.

While I can’t say I completely understand the mindset of people in the 1920s on what they would actually consider “excessive horror”, because honestly there isn’t a scene showing Nosferatu feeding anyone or anything really that would be considered violent. However, that’s the beauty of this horror flick.

The story is pretty simplistic really. Count Orlok (which was the change from Count Dracula because director F.W. Murnau couldn’t obtain the rights from Bram Stoker’s widow) is looking to acquire a new residence in Wisburg. He contacts one of his henchmen to send a realtor to his castle in Transylvania. Enter Thomas Hutter (Gustav von Wangenheim. This young man believes he will make a large commission to provide for his wife (Greta Schroder) better if he travels to the far land and sells the Count the rundown properly across from his place. His wife begs him to stay as her women’s intuition is tingling. However, Hutter is very adamant about wanting to show his wife how much he loves her. He travels over the Carpathian mountains where he stays the night with some Gypsies and they beg him not to go and warn him about the evil that resides in the castle. This is probably one of the first signature mistakes of a horror movie ever filmed! Of course he doesn’t listen to them and is flippant about the whole thing. After meeting with the very creppy Count Orlok (Max Schreck), Hutter presents the claim to the deed. Orlok notices of picture of Hutter’s wife and comments what a beautiful neck she has…would you call that neck-rophilia!!! HA HA…ah…umm…

Hutter cuts himself and Orlok can’t help but to suck his blood. This freaks Hutter out a little bit but he still decides to stay in the castle. As Hutter sleeps, he is visited by Orlok who has shown himself to be a vampire and feeds on Hutter, even though you never see it. 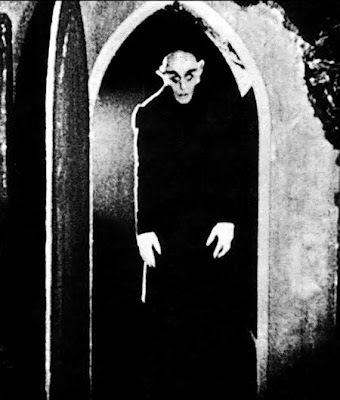 The Count, through the night, loads up coffins filled with dirt on a cart (sleeping in the dirt from where he was buried allows Orlok to travel wherever he may like) and leaves Hutter.

Hutter must escape the castle, the mountains, and his own weak body to try and stop Orlok from feeding on his home city…and his wife!

This truly is a eerily scary movie. Orlok is only on screen for about eight minutes but his presence is always dramatic and terrifying. Heck, even the shadow scenes are scary. 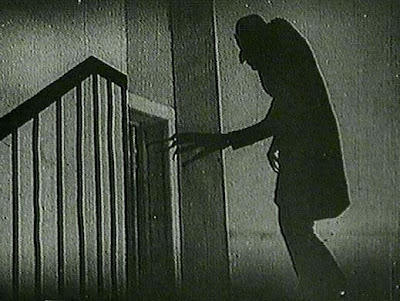 F.W. Murnau did a wonderful job shooting wonderful scenery, using practical and special effects of the time. What are the most powerfully shot scenes are those of Nosferatu. The door opens on its own and in walks Nosferatu, the coffin’s lid is raised and Nosferatu rises as stiff as a board, even Orlok carrying huge coffins with one hand is eerie. 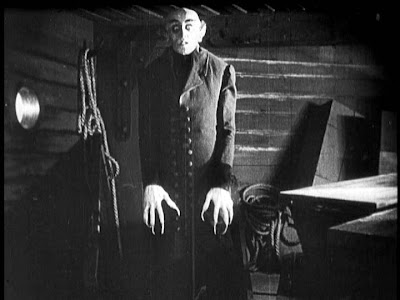 There are three points that I can show some negative on, however I do not know if it’s the movie’s fault or if it was just the style of acting and movie making back then. First, I have a problem with how extreme Hutter acts. He is rather a hyper character who I didn’t really root for. I didn’t feel like he was the hero or that he could even do anything to save his wife. Next, his wife, Ellen, also acts like a schizophrenic when she tells him not to go, sees him off, waits for him, and causes a ruckus at her sister-in-law’s place where she is staying. Her actions probably should have gotten her committed as she wails and runs to and fro over how much danger Hutter is in. Finally, the film really peters along. It is a slow moving film and could have been shortened about twenty minutes. Again, this might have been the style of filmmaking back then, but editing did exist back then.

Overall, the atmosphere and the vampire make this silent movie a jewel to watch. This movie helped to spawn a generation of horror flicks that still entices our imagination with the phantasmagoric and helps us imagine a land of vampires, ghosts, and monsters.
Posted by Film Geeks at 9:53 PM 2 comments: