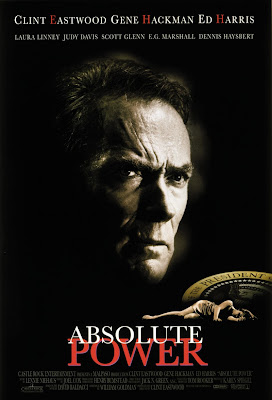 I've always liked Clint Eastwood. I loved him as an actor in most of his roles and I liked him as a director in many of his films. Because I've watched just about everything Eastwood has been in and has directed it's interesting to see what he takes out of rolls, what he bring to them, how some of his shots in directing mirror other directors and movies. It's like reading an author's entire run of books. By the end of it you are familiar with the person and his thoughts and where he comes from, depending on how much work the person has done. Where “Absolute Power” comes in is about right in the middle of Eastwood's directing work and about three quarters of his acting work.

Luther Whitney (Clint Eastwood) is a old time cat burglar who is on a heist one night where he witnesses the President of the United States (Gene Hackman) has the two Secret Service agents (Scott Glenn and Dennis Haysbert) kill the owner of the house's wife after some rough sex gets out of hand. Luther has to protect his daughter (Laura Linney) from getting caught up in the mess while trying to outwit the detective (Ed Harris) who believes Luther is responsible for the murder.

This is a movie that follows some of the same tropes that Eastwood's career (both the later parts and the general overview). It's an old timer who's passed his time but still has a few tricks up his sleeve (see “Heartbreak Ridge” and “Gran Torino” and “Space Cowboys” and “Blood Work” and “In The Line Of Fire – ok, I think you get it) who doesn't have to get involved but still does (“Gran Torino”, etc.). There's a hard line taken that what was done wasn't right but at the same time what he was doing wasn't right (pick any of the “Dirty Harry” movies and about half of his westerns). So it's not a bad thing but it is a role that Eastwood is safe in. I will give him credit too, he's aging and old and he admits it freely. Death still fears him – but he does not shy away from that fact. Honestly, I kind of like these “anti-heroes with a heart of gold” roles. Eastwood is decent in the film and does a great job in portraying emotion without the need to say anything. Some of his camera work and shot set ups pull some punches from the old Sergio Leon and Dirty Harry days. However, there are a few shots that are done perfectly and convey emotion, mood, setting, and intensity which he does and uses better in other movies.

The movie suffers from Hackman's portrayal of the President. He's almost too much of a bad guy. Eastwood likes to have a mix of morality of other characters but even in darkest movies you know who the bad guys are. Also, watching a non-nude, rough sex scene with Hackman (who was about 67 at the time) is not something I really want to see. I wouldn't even want to see a young Hackman in the scene. Scott Glenn and Ed Harris do goods jobs and are on different sides of the same coin in the since that their characters are both good but on opposite sides of the line. It's also nice to see them back together since their time in “The Right Stuff”. Judy Davis who plays the President's Chief of Staff is absolutely annoying in this and some of her lines make no sense in how she delivers them.

The story is well paced and entertaining. It keeps you in suspense at times. It just has a hard time of encapsulating that this is involving the President of the United States. Eastwood is fine as the star and as the director. Worth the watch.
Posted by Film Geeks at 1:12 PM

Mate, who is in Australia, the Archeage Gold servers are in Russia and EU. Please tell me other game with "great netcode" wich allow you to play normal with 400 ping?This reminds me of the RS Gold time when our community had BF servers. So many times there was people from US who joined there, and the servers was located in Stuttgart. So they play round or two on EU server (they have filters and know...or Cheap Archeage Gold dont know may be...where they join) and start to moan: This Buy Archeage Gold server is laggy! And so on...