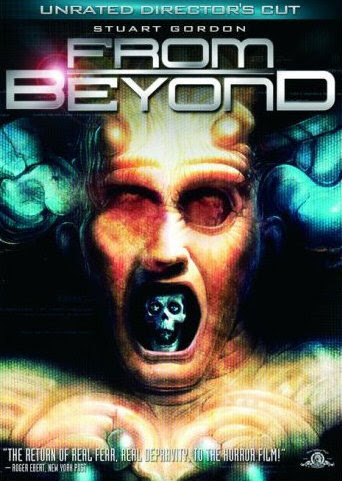 For true horror fans, you know you will at the very least be entertained when the names Jeffrey Combs and H.P. Lovecraft are involved in the same movie. Combs has been a cult horror actor since his work on “Re-Animator” and as for Lovecraft, well his stories have seem to be a default set for cheesy horror movies for sometime. Combs; reteaming with “Re-Animator” director, Stuart Gordon, provides another interesting horror movie with some equally interesting special effects.

Dr. Crawford Tillinghast (Jeffery Combs) and Dr. Edward Pretorius (Ted Sorel) are experimenting with a machine that taps into the pineal gland to stimulate the sixth sense. As one would expect with this kind of movie, unexpected results occur. Tapping into a biological state somehow open up another dimension where weird creatures exist. A creature who is only referred to as ‘He” or “Him” kills Pretorius who goes crazy right before hand. Tillinghast also goes a bit crazy and cuts power to the machine. Crawford is arrested for the murder of his colleague. He is thought to be schizophrenic because talking about flying worm creatures and monsters eating people’s heads sound a bit far fetched to some people. But not to Dr. Katherine McMichaels (Barbara Crampton)! Dr. McMichaels, who looks like she is just once step from “if she only tosses off her glasses and lets down her hair in slow motion she’ll turn into a buxom beauty, works on trying to cure schizophrenics by experimenting on them and she believes Crawford and Pretorius might have found the cause of this mental disease. The science is at least there and a bit interesting. Heck, it’s more convincing than the effects of drinking man pineal juices in “The Leech Woman”!

Katherine convinces Crawford to recreate the experiment to prove to the DA that he didn’t murder Dr. Pretorius. Escorting them on their adventure to (of course!) is a cop named Bubba Brownlee (Ken Foree who you might know as the black cop from “Dawn Of The Dead”). Officer Bubba loves to make really unfunny jokes and laugh annoyingly at them. However, it’s nice to see a character in an “everyone but the audience thinks he’s crazy” be open minded about the main character’s innocence.

Not to give too much away, but the trio recreate the experiment, meet the creature who has taken on the personality of the S&M junkie (sure why not?) Dr. Pretorius, start to transform their own third eye which makes you see is pixilated Predator vision, and begin changing.

The story is good, but not great. There is some decent science but there is definitely no common sense with any of the characters. Crawford can be forgiven somewhat since he has gone through a traumatic experience that has left his mind a little fragile. However Katherine and Bubba don’t have any excuses. Combs isn’t as fun as he was in “Re-Animator”, being demoted to more of a second banana who looks like a pouting puppy dog. Crampton has a Dr. Christmas Jones (“The World Is Not Enough”) meets “She’s All That” vibe going on and her development as a character is not very believable, especially when she breaks out the skimpy leather S&M suit (which fits her perfectly). Foree is a little annoying at first but at least he’s not a stereotypical “what the heck was that?!” cop-in-a-horror-movie character.

The visual effects are what makes this movie though. The unsung visual artists and puppeteers are wonderful. The main bady is definitely creepy and sticky looking. The appearance is definitely reminiscent of “The Thing” (1982). The transformation Combs undergoes is well done and creepy. Probably an overlooked effect that is very well executed is the third eye symbiot. It is very organic and doesn’t feel too puppet-like. The creatures and visual effects definitely are the driving force of the movie.

I would probably call this movie the poor man’s “Altered States”. Good but not great. Somewhat likeable but annoying characters. Creepy monsters, good practical effects, and a lot of blood, slime, and other goo. A good movie for a cheesy creature feature movie night.

Glad to see the Film Geeks are still doing their thing. =)

We never leave...we just get overwhelmed with movies or...umm...what's that thing I rarely have called? A life? Something like that...I think it's French. - Patrick