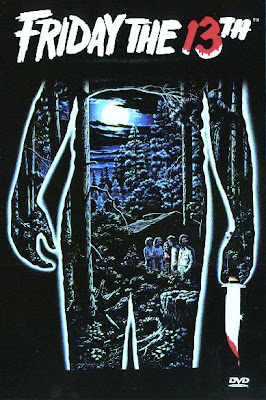 Jason Voorhees. This slasher star ranks up there with the great ‘80s movie murders like Michael Myers (“Halloween”), Freddy Kruger (“A Nightmare On Elm Street”), and Leatherface (“Texas Chainsaw Massacre”). Arguably, he is more liked because of the more realistic attributes than those like Freddy.

It all starts all the way back in 1957 with the drowning of young Jason at Camp Crystal Lake. The following year, two counselors are brutally butchered after breaking the horror movie rule of having sex in a horror movie. The camp closes and after trying to reopen a few more times without success, a new owner comes in cut off shorts to reopen the “cursed” camp. Before the camp starts, the counselors show up early to get the camp ready. Among them is Jack Burrel (Kevin Bacon!) and Alice Hardy (Adrienne King). Either not realizing they are in a horror movie or thinking they can get away with breaking the rules, they engage in all sorts of bad behavior. They do drugs, drink alcohol, have sex, and even play strip Monopoly. To be fair, that’s probably the only way to end a game of Monopoly without wanting to become a psychopathic murderer as well. Directed by Sean Cunningham and written by Victor Miller, we are treated to some interesting murders and mayhem; and with some of these teens being grossly annoying at times…it turns out to probably be one of the most fun times you can have at a summer camp.

While considered an iconic movie, it does have its share of flaws. The teens are pretty annoying but except for the cook in the early part of the movie, they seem pretty believable characters. The cinematography is pretty good. The best bits are when you experience the movie through the eyes of the killer. By no means the first time it being done, the forest setting mixed with the iconic score lends to some very creepy moments. You might find yourself immersing yourself deeper into the killer or twisting in your seat to try and get the camera to turn around. While some deaths tend to happen a bit too quickly or zany (archery range scene), there are some really splendid ones like the bathroom scene and Bacon’s is good. Considering that the master himself, Tom Savini led the special effects department, it’s hard to be disappointed. While there is violence, there isn’t a ton of gore and blood today’s horror fans have come to expect. It’s almost a “tasteful” slasher film. The twist in the film is done pretty well, however I do have a problem with what happens after the reveal. SPOILER: after Pamela Voorhees (Betsy Palmer) is revealed, she has to put way to much effort in finishing off the last survivor. While she does have the element of surprise on her side for the others, she seems to be very weak with Alice and is constantly getting knocked unconscious. END OF SPOILER. The horror is definitely done well, especially compared with the “horror” films of today. It rarely relies on jump scares (like Crazy Ralph in the pantry scene) but the suspense is built for most kills. The exception, being probably one of the most well done slasher scenes in horror movie history is Bacon’s scene. The mix of rest and calm at first with the surprise and confusion of the end result is awesome. The hockey mask doesn’t come into play in this movie but we do get to see zombie Jason which is a treat. Probably the best of the series, well at least they don’t go into space. That’s when you know the series is doomed!...crap.
Posted by Film Geeks at 12:01 AM