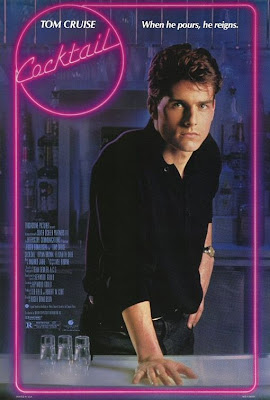 When creating a romance movie, or romantic comedy as IMDB wants us to believe this is, it is best to put in just one likeable character. On top of that, we should have at least the main character be someone the audience roots for. Sure he/she/it can have foibles and personality obstacles to overcome, but I shouldn’t wish that a rapid flesh eating virus comes along and devours him/her/it. Then again, maybe “Cocktail” is that one movie that says to heck with likable characters and development that would make sense or at least make for an entertaining movie!

Brain Flanagan (Tom Cruise) comes out of the military and tries to make a million bucks. After quickly failing in ‘80s montage fashion, he gets a job at a TGI Fridays as a bartender. His Mr. Miyagi in bartending is crotchety and nihilistic bartender, Doug Coughlin (Bryan Brown). Doug is a guy that would drive a man to drink with his level of sleaze and wallowing. Brian and Doug team up to try and make it rich. Doug through the attempts of marrying rich New Yorker socialites and Doug through bartending in Jamaica where I guess they don’t have taxes. After constantly wrecking the good things Brian is going for Doug comes back into his life to, surprise to no one, does it again! Doug is like one of those professors in college who want to be “hip” with the kid-os but ends up failing in every way. Jordan Mooney (Elisabeth Shue) quickly falls in love with Doug in Jamaica because she is attracted to bartenders who grin all the time and have no personality. Doug gets Brian to cheat on Jordan. Jordan finds out, leaves, and now Brian has to decide what to do with his life and with Jordan.

BLAND! Boy is this movie bland. The movie should be called Bland Tom Cruise Grinds Like He’s Getting A Chlorine Enema. No one is likeable in this movie. Brian is a jerk and a spaz; Doug is just sleazy; and Jordan, easily the most likeable character, is kind of air heady and becomes unbelievable and naïve in the movie’s third act. Brian and Doug aren’t amazing bartenders. Sure they can flip the bottles and catch them and whatnot, but it’s all just so bland. For example, in Jamaica, Brian is pouring a daiquiri and he puts the stirrer in the blender so that it falls into the glass. Doug calls this “feat” impressive! Seriously?! They also take part in bland, white people dancing with tightened faces and moves that appears their backsides are just as tight. There’s no sense of realism in either characters or plot. The ending is laughable, especially with the scenes with Jordan’s father. The only solace I found through the whole thing was the ending. No one lives happily ever after. Brian becomes stuck in a marriage that he’s only in for one reason. He doesn’t make a million dollars. He doesn’t do anything with his life but pours drinks. Doug, on the other hand, he was such a slime ball that he decides to kill himself from being bankrupt using money that he married into to. Boo hoo! Either that, or he was trying to get out of the movie as much as I wanted to.

defenitely not a good bartending movie