DON'T SCROLL DOWN YET!

Like my “Glitter” review (wow, I actually wrote that), I’m going to do this review in a different format than usual. I will describe the plot and you will guess the name of the movie. Ready?

There is a young man who happens to be a farmer who does not know his father or mother. He lives in a universe with an evil empire that rules through might. The boy is restless with his life and dreams to join the resistance against the evil ruler. The boy comes into possession of something that leads him to a wise, outcast, old man who is hiding from his past. The old man tells the boy that he needs to come with old man and joy the resistance group. The boy is hesitant but after the death of his uncle he ends up leaving. Along the journey, the boy learns how to fight with a special sword and how to use a type of magic that flows through nature. The old man teaches the boy to use special skills that were taught to him when he fought in a great and legendary war. Before getting to the resistance, they stop off in an area that has danger lurking around every corner. After a run in with the some incompetent foot soldiers, they continue on their way. The evil ruler learns of the boy’s existence and his special attributes and sends his right hand man to capture the boy for his own use. The right hand man has extraordinary magic powers that make men tremble before him. He captures a princess for the rebellion who was sent for help for the rebellion. The boy learns of the princess’ capture and decides to divert from the original path to attempt a rescue. The boy meets up with an outcast ruffian who helps in the rescue in order to get payback from a past failure. The evil magician ends up killing the old man who sacrifices himself in order to protect the escape of the young boy and his new friends. They escape and while the boy is sad over his mentor’s death, the princess consoles him. The three end up making it to the rebel base but the bad guy’s army is very close on their heels. The rebellion makes ready and the boy prepares to use his abilities to take out the evil magician’s flying death vehicle. Putting his recently learned powers to the test, he ends up defeating the magician and puts a hurt on the army of the evil ruler. As the evil ruler lays out a new plan to defeat the rebellion, the young boy is heralded a hero and is honored by the rebellion.

Now, what movie am I talking about? That’s right, I’m talking about none other than that classic motion picture… 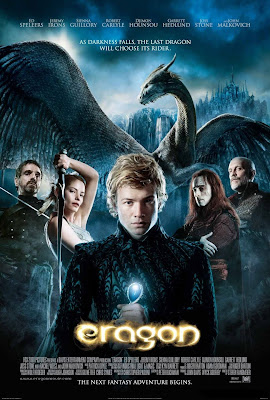 What? Wasn’t that obvious? What did you guess? Star Wars?! Why? Only because I didn’t have to stretch too many of my explanation points for you to think that? The sad thing; there are probably more parallels that I’m just forgetting. Let’s just go through the cast of characters to give credit where credit is due.

Luke Skywalker is played by Eragon (no, not Dragon..that’d be stupid!) acted by Ed Speleers.

Obi-Wan Kenobi is played by Brom acted by Jeremy Irons.

Princess Leia is played by Arya acted by Sienna Guillory.

R2-D2 is played by Saphira (the dragon) voiced by Rachel Weisz.

Han Solo is played by Murtagh acted by Garrett Hedlund.

Darth Vader is played by Durza acted by Robert Carlyle.

The Emperor is played by Galbatorix acted by John Malkovich.

And I’m not even going to try point out the comparisons with Lord Of The Rings!

Re-read my initial description above as fast as you can. That’s how quick this movie moves.

This movie has a lot of character it introduces but doesn’t tell us who they are. The only somewhat fleshed out character is Brom. Jeremy Irons is so cool but I feel sorry for him being in this. Ed Speleer as Eragon is abysmal. He seems like a character from the year 2000 and not from Ye Old Dragon Age ero. Murtagh is a joke character who suddenly shows up, is quickly given a reason to stay, and leaves. There is a start of a romance between Arya and Eragon but that is completely forgotten about. It’s probably because they are brother and sister. Saphira is also hurt by the hurry up storytelling. Like “Reign Of Fire”, it seems like the movie ABOUT DRAGONS, wants to show them as little as possible. This movie ends up being boring because it tries to cram so many characters and so much story into a very little time frame. The visuals aren’t horrible but again, once you focus on them you find yourself quickly thrust into another scene. I think I went cross-eyed watching this movie move so fast.

hi,my dear friend,i like this article and bookmark,thanks for sharing!Best regards!

Hey, so I know this post is old as f*ck, if I may swear like that.
The reason the movie is such a fiasco is because the book was really good, and really took the time to go through all the characters and explain their stories.
Arya, is not his sister, she is an elf, and she should be asleep/fainted throughout the movie. Because she is much older than Eragon, like 100 years older, he is but a child and she has no interest in him, in fact most elves find Eragon quite crude. Try comparing people and monkeys. Yeah, that about covers it.
Again the movie is really BAD, try the book, you won't be disappointed.

The post is very informative. It is a pleasure reading it. I have also bookmarked you for checking out new posts.

@Pi - I agree 100% with what you said, I actuay ame here to the comments ection to say that :) but yeah, that's how most movies are when taken straight from the book.