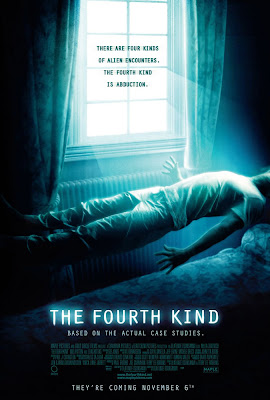 “The Blair Witch Project” started it, “Paranormal Activity” perfected it, “The Fourth Kind”…tried to abuse it. The fake documentary offers itself to some interesting possibilities and plots. “Blair Witch” was crotch-punching boring (yes crotch-punching!) and “Paranormal Activity” executed itself almost perfectly with the mixing of a little “Cloverfield” shaky cam with the fake documentary style. This movie comes out right at the beginning and says it is real and the scenes witnessed with the actors are fake…I mean literally. Milla Jovovich comes out from a hazy forest and tells us this! Even director and writer, Olatunde Osunsanmi takes part in the charade by being an interviewer of the “real” main character.

The movie is about the actors acting out the main story mixed with “real” audio and video accounts of the actual events. The main story is about Dr. Abbey Tyler (Milla Jovovich), a psychiatrist, treating people who, we come to find out, have been experiencing abductions by aliens. As Abbey starts treating the people of Gnome, Alaska who are experiencing this phenomenon, she starts to find out that she is having her own experiences. To delve any deeper into the plot would give a lot of it away. However, I think the movie does a good job at self destructing without my spoilers.

This isn’t a “bad” movie but it is poorly done. I was constantly pulled out of the movie by seeing “Milla Jovovich as Dr. Abbey Tyler” and other credits pop up to remind us that we are watching a movie within a movie. Mixing that with the fake “real” clips just led me to boredom with the whole set up. It would have been better if you had the movie mix the “actual” video into certain parts to kind of get the “actual feel” of the events. For example, when the footage of the abduction happens through the cop’s camera, it would have been great to see that cut into the movie. You add realism by having the footage grainy and realistic rather than through the great resolution of Hollywood cameras. The best scene with one of the most amount of tension is the hostage situation. The “real” footage is kind of more cut into the movie and adds a greater sense of realism to it. The only other high tense scene involves the abduction scene which does a good job with soft lights, shadows, and surreal camera shots. The ending is pretty decent and somewhat realistically believable. However, the biggest flaw is the motive of the aliens. SPOILER: The whole point of the abductions it seems is to create floating conduits for the aliens to speak to people who are placed under hypnosis. So pretty much their philosophy is the following: Step 1: Screw With People. Step 2: ???. Step 3: Profit! The reveal that they are either gods or demons pretending to be gods is completely lost in the absurdity of the movie as whole. If shot differently, the subtlety of the reveal probably could have been more acceptable. END OF SPOILERS. Also the “real” Dr. Abigail Tyler is Charlotte Milchard and it’s sad that she is probably contractually obligated to not list this movie in her acting credits because she is easily the best actor in this piece. Elias Koteas is pretty unlikeable here and is not even remotely believable. However, I really like him as an actor and he’s always willing to play in weird movies like “The Mothman Prophecies”. Not a bad movie, but poorly executed. The aliens from “Signs” had a better plan and they were killed by dihydrogen monoxide on a planet and people made up of it!