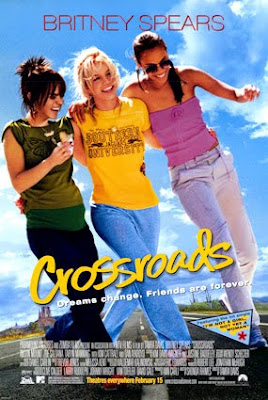 Listen, I’ve always been an honest reviewer. I watch movies all the way through before I comment on them. I don’t favor popular movies; I was critical of “Citizen Kane”. I admit to crying in movies, even ones where you wouldn’t expect it (“Charlotte’s Web (2006)”). So it pains me to admit that I’ve watched “Crossroads”…twice…completely…and only one of those times was with the Rifftrax’s commentary (http://www.rifftrax.com/rifftrax/crossroads) …and that was on the second time. This is going to be painful.

Britney Spears (*hard swallow*), plays Lucy who goes on a road trip to not have sex with her boyfriend of three years Justin Long and get away from her over barring, issue ridden father, Dan Aykroyd. Joining her is Zoe Saldana who must have paid her penitence early in her career for being a part of the process of ruining the “Star Trek” 2009 movie. Also Taryn Manning and Anson Mount “star”. I only mention these folks so that when the robot apocalypse happens…we’ll know who to get SkyNet first. Believe it or not, this was actually written by someone who was not a 400lb baboon with an addiction to very cheap whiskey. Shonda Rhimes is another person to add to your SkyNet list. The director, or should I say the person who told the camera guy to film this holocaust, Tamra Davis, must have been still buzzing from her work on “Half Baked”. Also, let’s mention David Gale. Why? Because not only was he a producer (one of eight!) on this movie, but he also helped produce “Pootie Tang”…Come on SkyNet! Get on with Judgment Day!

This movie should be called “Britney Spear Tries To Get Laid And Girls Squeal And Giggle On An Annoying Car Ride” the marquee could just read BSTTGLAGSAGOAACR for short. There is no point to this movie. I found myself throwing my glasses off my face at least three times to stop from being embarrassed…and I was the only person in the room! Britney, surprise surprise, can’t act. She barely sings well yet during the karaoke scene they make a bunch of money on the blandest songs I’ve heard. Half of this movie is Britney being mad at the lower half of her shirts and tearing them from the upper part. Anson Mount is the love interest but I kept mistaking him for a brick wall, which was ironic because I wanted to throw bricks at him during the whole thing, except I think his and my cycles synched up. This movie wasn’t as self-masturbatory as “Glitter” was but at least Maria Carrey is hot in it. This movie is literally about Britney Spears being a rooster-tease (yes, I went there) and then trying to get laid. This is the female equivalent of “Road Trip”.

Again, I have come up with a list of five things I’d rather do than watch this movie…for a third time.

1. Punch a baby in the head

2. Run my crotch through a pitching machine

3. Lick Robin Williams arms until he is without hair on them

4. Listen to N’Sync’s “Bye Bye Bye” on repeat until my head explodes like in “Scanners”

…well ok…not the last one.

I just saw about 20 minutes of this Britney Spears film "Crossroads". Honestly, it seems to have brought me a bit of a crossroad of my own, as I feel this sudden urge to abandon my established career and return to college for a double major in journalism and film with the goal of launching a career in film criticism merely on the off chance that I might someday have the opportunity to publish write review stating just how exquisitely awful I found this insipid thing. Of course, I had no reason to watch so much as a minute of this thing other than the fact that it is on HBO and I am an insomniac, but last time I looked I was still paying some kind of cash money for HBO, so I am at a loss to explain why anyone at the network would have though that showing me this film might conceivably be a fair trade for my $. Rubbish, trash, insipid, boring, bah humbug!