Cabin In The Woods, The

The Cabin In The Woods 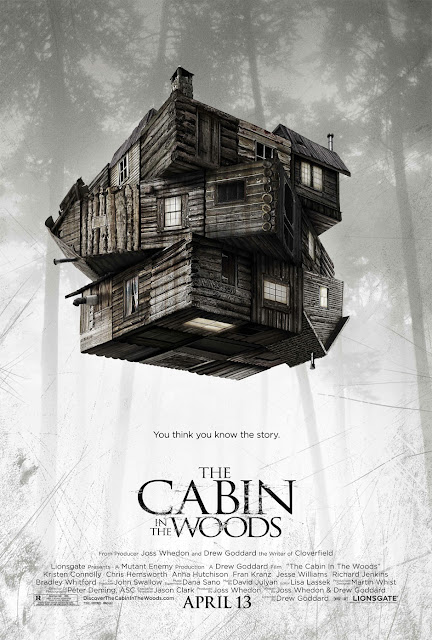 A horror movie, written by Joss Whedon? It has to be nerdy, it has to be well written, it has to have some actors from previous Whedon shows, and there has to be some kind of fresh twist – right? Ya, pretty much.

This movie has a different take on the “five friends go into the woods and bad stuff happens” horror trope we've come to expect. This is a B-movie within an A-type movie. I'm not spoiling anything seeing as the movie starts from a different point of view than what we've come to expect from these movies, but I don't want to go into too much detail. Just know that there is a full story and for half the movie you're watching a B horror film. It's pretty fun!

This was a movie I had to digest to see how much I ended up liking it. It was definitely a fun movie. Whedon's hands are clearly all over this film and it's a lot of fun. It's a new take on the old horror cliché and unfortunately, that part of the movie is the weakest part – and I think that's on purpose. It's fun to think that every horror movie in the world could potentially exist within this universe that Whedon has help make.

I really wanted to see more from the main story (Story A) and the playing of tropes is fun. It reminded me of watching “Scream” with it being a play on horror films...within a horror film. The character creations are great and I wish they would have taken longer on more Story A plot. It'd be nice for some flashbacks or some history; however it would have dragged the story down and the final reveal wouldn't be as fun. The pacing does move a little too quick and the ending is unexpected although maybe not for the best.

If you're a fan of horror movies, especially the B-horror “go into the woods and split up for no reason” movies, definitely check this out.
Posted by Film Geeks at 5:01 AM

I will never Cheap Archeage Gold consider defeat and I will remove from my vocabulary such words and phrases as quit, cannot, unable, impossible, out of the question, improbable, failure, unworkable, hopeless, and retreat; for they are the words of fools. I will avoid despair but if this disease of the mind should infect me then I will work on in despair. I will toil and I will endure. I will ignore the Archeage Gold obstacles at my feet and keep mine eyes on the goals above my head, for Buy Archeage Gold I know that where dry desert ends, green grass grows.