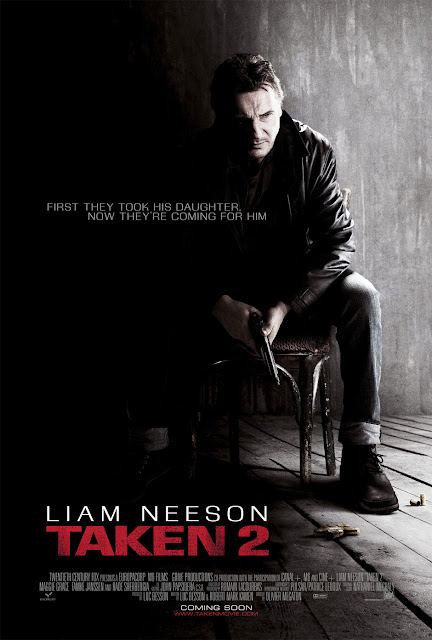 I loved “Taken”. In my opinion, that's the closest to a perfect action film as you can get. On part with “Die Hard 1,2 and 4”. Realistic, tense, action-packed, good characters without getting bogged down in back story; “realistic” is the perfect word to describe it. So, the big question for me was – can you repeat that? I mean, even “Die Hard 2” made fun of itself; heck, so did “Gremlins 2”. Does it sacrifice what made the first one any good for the sake of a sequel? Or is it on par with “Terminator 2” where the sequel is actually better than the original? Well...not quite.

Bryan Mills (Liam Neeson), the ex-CIA dad is in Instanbul with his ex-wife and daughter. The dead guys from the first ones have families who want to take their revenge on Bryan and his family and like all bad guys – they want him to suffer.

There is so much of this movie that I love with just a couple of flaws. First of all, we see character progression of Bryan. He is trying to change and it is evident from the first scene. Unlike a “Die Hard” or other action film, the character doesn't just reset himself so he can progress in the same manner as the first one. His wife, Lenore (Famke Janssen), isn't angry at him, but is trusting towards the man who rescued her daughter and she appreciates it. His daughter, Kim (Maggie Grace), is dealing with some PTSD but also isn't a stuck up brat like she was in the first film. She trusts her dad but is still a teenager. This put me on the right path.

The bad guys have a good motive. It's simple but understandable and like the bad guys from the first one, they aren't stupid because the plot calls for it. The hero doesn't mow through them quickly and they get their shots in. The body count is relatively low for an action film of today (30 DOAs). The hero doesn't have to mow through 100 henchmen to get to one boss battle before taking out the weak kingpin. “Taken” leaves that for Arnold and Seagul and Stallone.

The battle damage is realistic, the hero gets out of breath, cars don't just explode for random reasons, the tactics (both offensive and defensive) are realistic. I can't tell you how much I love watching these movies for the realistic tactics they employee. Bravo to the trainers and for the film directors who listen to them. The weapon play and fight scenes hold tension even when the perspective changes from the hero to the bad guy(s). The daughter gets to take an active part this time and now it's the mother's turn to do nothing. But, again, this is consistent with the growth and experience of the characters since the first movie.

As for the few flaws they aren't as nitpicky as my ones for “Taken” are. Some fight scenes and the driving scene employee the “get up too close” camera viewpoint when it's not needed. It wasn't needed in the first one, and it wasn't needed this time. The film seems quick even though it's about the same length as the first one. It doesn't seem like a lot happens and there are less changes of scenery and less characters than the first one (which is too bad because my favorite scene for Taken was the cop's wife getting shot in the leg – man I could watch that over and over again!). It would have been nice to see the pace slow down just a little bit and maybe add another act in the mix. However, the movie does a good job of holding tension and drama with just a slight hint of “James Bond villain slow kill douchebaggery”.

I was really scared going into this film considering how much I enjoyed the first one. My fears were elevated from me and I enjoyed this one as well. The first one still holds a special place in my heart. However, I can safely recommend this if you enjoyed the first one and if you didn't, then no one can help your horrible, horrible taste in movies.
Posted by Film Geeks at 9:22 AM

Henceforth, I will Cheap Archeage Gold learn and apply another secret of those who excel in my work. When each day is ended, not regarding whether it has been a success or a failure, I will attempt to RS3 Gold achieve one more sale. When my thoughts beckon my tired body homeward I will resist the temptation to depart. I will try again. I will make one more attempt to close with victory, and if that fails I will make another. Never will I allow any day to end with a failure. Thus will I plant the seed of tomorrow's success and gain an insurmountable advantage over those who Archeage Gold cease their labor at a prescribed time. When others cease their struggle, the Buy Archeage Gold mine will begin, and my harvest will be full.