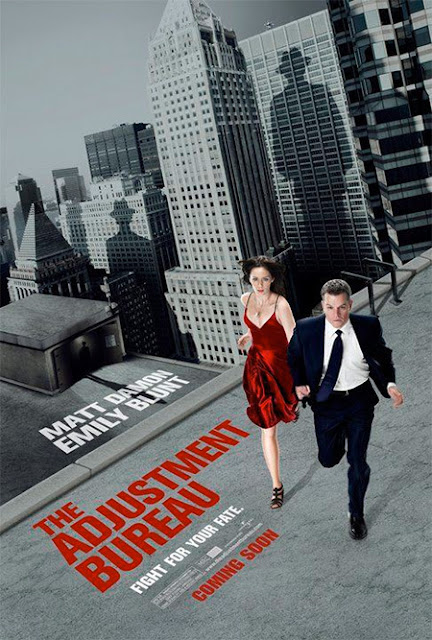 When I saw the trailer for this movie I was excited. It reminded me of other “man behind the curtain” films that I like. The best one being, of course, “They Live” and another great one of “Dark City”. Those movies were fun and exciting and interesting and thought provoking. Yes, even watching Rowdy Roddy Piper have an extended fight scene over putting on a pair of special sunglasses was fun. This movie was...I'm sorry I fell asleep there. This movie was...*yawn*. Oh man, sorry. This movie made me feel how Matt Damon acted in it.

Man “Dark City” was gritty and interesting and had a point and was thought provoking. It had drama, it had suspense, it had characters emote. Boy, how I wish this movie was “Dark City”.

Matt Damon barely has a personality in this. I've seen him act better in “Saving Private Ryan” where he seemed to care a little. Emily Blunt and him have no chemistry together. They get together because the story calls for it and you're told they should. I didn't find myself rooting for them, I just wanted to know more about the Bureau.

Well you kind of don't get anything other than probably angels with god. But this god seems to have a plan, but not the plan that seems like a plan, only a plan that isn't planned and you have to find that without planning for it and things and such. This movie tries to play both sides of the fence and it wind up looking foolish and silly. The overall scheme makes no sense and you barely see the Bureau at work. You also question why they work with special items and not just “do the things they want to”. Then there's the story of two lovers fighting against the universe to be together. All I could think of was that I hope Damon and Blunt are ok bringing about the next dark period of human history just so they can hook up.

Poor pacing, incoherent storyline, terrible acting, and I found myself wanting to fast forward through most of it. Go watch “Dark City”! Go watch “They Live!” This movie needed some major adjustments.
Posted by Film Geeks at 12:20 PM

Minecraft is the fastest growing Java game in the Internet history.
Minecraft servers is a server game of favorite players. This is because it allows you to create Minecraft Skins,Minecraft Maps, Minecraft Resource Pack and other creative possibilities. This is a war game that requires fighting against monsters appear at night and survive by fleeing them, provide for the basic needs of you, gather food, wood, etc. Because this game has many options and entertainment graphics should it become popular all over the world.

Minecraft free download is a sandbox game (sandbox) have been shaped independently by Swedish programmer Markus Persson and is then developed and published by Mojang. Full PC version was released in late 2011. In May 2012 game shape, to cooperate with developers 4J Studios, to be released for the XBOX360.

Start off Clients as well as Cellars and garages within just Lumbridge check out the northern part of the house upper with all the central heaters. Go into the downstairs room hatch-out from and . wall structure this can be tough to place in case coping with northern.Consult with Darren Lightfinger they requires runescape precious metal and requirements you to please take a chalice. Discuss with main robber The boy wonder regarding receiving the important necessary.
Fifa 15 Ultimate Team Coins