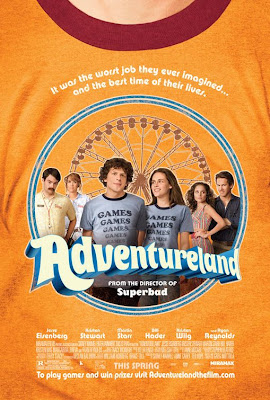 At the time of this writing I have ruminated on this movie for three minutes. This movie has put me into a mind set where it is the 1980s and I am a character of this movie. I am also very, VERY grateful that I don't have some old fashion razor blades at my disposal to slit my wrists.

The writer and director for this movie is Greg Mottola who also wrote "Superbad". The trailer for this movie made it look like a teen R comedy/coming of age like "Superbad". "Adventureland" could be classified as a comedy the way Dante's Inferno is classified as a comedy. The movie stars James Brennan who plays Jesse. Jesse needs to make some money for college and has to resort to the summer job of a carny. There he meets a couple of friends played by the very lovely Kristen Stewart and the very funny Martin Starr. Also thrown into the mix is Ryan Reynolds and Bill Hader. For a cast so filled with comedic talent like Starr, Reynolds, and Hader, you'd be led to believe this movie would be a lot more funny. I almost took up hard drinking and drug use because of this movie.

So Jesse gets this job and falls for Em (Stewart), but Em is seeing an older and married guy named Mike (Reynolds). Everyone's life is falling apart but the story is a classic coming of age story. To tell more than this would ruin the depressing storyline. Although that might get less people to want to throw themselves off a bridge after seeing it.

For being so depressing this movie really isn't horrible. However, I'd watch "Nick And Norah's Infinite Playlist" if I wanted a similar story but with a more upbeat story. That movie made me want to have all-nighter in the city again. This story makes me wonder how much a bottle full of amphetamines would taste like. Ok, Kristen Stewart is just gorgeous in this. She's one of those people who is so cute and normal she's hot and she's probably the best actress in here. Martin Starr is the big comedic relief but I didn't laugh once through the entire movie because of the cloud of dread this movie produces. Another flaw is Ryan Reynolds not being his typical character. Being type cast as the smooth and slick guy probably isn't the worse thing in the world and he should stick with that. He wasn't even cool in this movie...ok he was a little cool but still. Jesse Eisenberg is awkward in this film and I felt jealousy in watching him kill Stewart so many times. This movie just makes me glad I was only a little kid in the 1980s and I missed how depressing it all was. Now if you'll excuse me, I have to go watch "Schindler's List" to cheer up after this movie!
Posted by Film Geeks at 8:10 PM

I recently came across your blog and have been reading along. I thought I would leave my first comment. I don’t know what to say except that I have enjoyed reading. Nice blog. I will keep visiting this blog very often.
Actual Tests