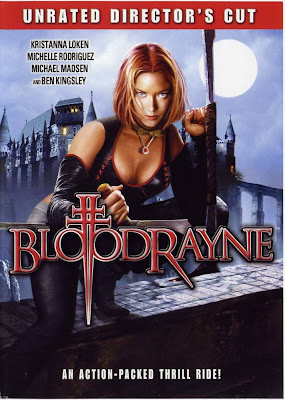 Bleh. Phe. Neh. Ib. Coo. Nuh. Derm. And Phu. These are all words that are acceptable to utter after sitting through this movie. I don't try to jump on "oh So-And-So is a bad _____" trains too often. However, when the global collective is stacked against you, you have to wonder if they're on to something. Uwe Boll is not the worse director I have ever seen...so he fails at that too! Is there anything redeeming about this movie? Let's find out.

So Rayne (Kristanna Loken) is a half vampire/ half human who is different from other vampires because...well she's not really different at all. In fact, the only difference between vampires and humans in this movie is that vampires die easier and quicker than humans and they have a lot more blood in them. Rayne joins an order led by Michael Madson against Kagan (Ben Kingsley...yes another role taken by Kingsley to pass his time as he slowly fades into the abyss). Somehow Michelle Rodriguez fits in there with Billy Zane but you shouldn't look that deep into that.

I wish I had something nice to say. Hmm. Kristanna Loken and Micelle Rodriguez are good eye candy and they're in leather a lot. Ooo I get a RAM chip!

I have created what I hope is a fun list of things that stood out to me and I hope it provides for some entertainment.

I've never played the video game so I can't compare it with the movie. I can say that a movie that makes me log in to Microsoft Money and hit "Update My Accounts" every five minutes to see if I am magically getting money that I don't expect to get...is a sign of a bad movie.
Posted by Film Geeks at 6:15 PM

The best description review as I saw, great pictures, thanks!
TestKing