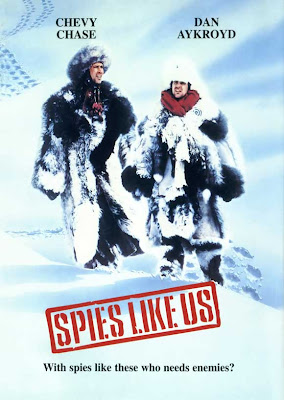 1985. The Cold War is still going on with no end in sight (we just had to wait about five more years). American’s view of the has turned into a more laughable state and a less serious tone is taken with respect to them. There’s the socio-political-economic factors that led to this new view sure. However, I blame media! In the ‘50s you had movies like “The Day The Earth Stood Still” and probably the best parallel to “communists among us” McCarthism paranoia, “Invasion Of The Body Snatchers”. Yet, times changed and with it both countries grew. Late night hosts found out it was ok to make jokes about “the Reds” and you also had more and more movies look at in a new light. Not one of fear and treachery, but something that could be parodied and made fun of. A popular, more softer look at the made the Iron Curtain look more like the Velvet Curtain. “Spies Like Us” is one of those movies that help end the Cold War!

This film is directed by genius director, John Landis, who I believe had his hand in everything ever made. On top of that you have two ‘80s comedic superstars, Chevy Chase and, the comedicly underrated, Dan Aykroyd. What’s that? You want more stars? Well how about directors Michael Apted, Martin Brest, Joel and Larry Cohen, Terry Gilliam, Frank Oz, Sam Raimi? Also there’s Ray Harryhausen, Robert Paynter, and Derek Meddings, B.B. King, and Bob Hope! Like I said, Landis had his hand in everything!

Two CIA agents, Emmett Fitz-Hume () and Austin Millbarge (Dan Aykroyd) are set up by rouge elements of the government to be decoys for two other agents whose mission it is to hijack a Soviet nuclear weapon. Despite everyone’s best efforts, the almost “Odd Couple” pair thwart every attempt to carry about what they believe is solely their objective. Does zaniness happen along the way?! Is “Rocky IV” the best Rocky? You betcha!

Classic Landis directing and classic Aykroyd writing. This is on par with “Stripes”. You have some classic bits including the “Doctor doctor” scene. On top of that this movie is just classic ‘80s funny. The story kind of lags in the middle and almost makes you forget that the two spies are on a mission but it picks right back up again pretty quickly. It doesn’t matter that the storyline, ultimate goal, or events don’t really make sense or couldn’t really happen. This is just great fun and still good to watch today. It might be a bit dated for anyone who wasn’t alive in the ‘80s even a little, but it’s still a classic comedy. Oh, also for you “Weird Science” TV fans, you can thank this movie for starting Vanessa Angel’s career. She was the hot Russian woman Dan Aykroyd gets with! Now go listen to some Soul Finger!