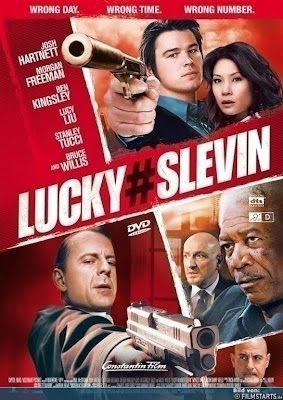 There are relatively few good mystery movies made these days. The few exceptions being "Snatch", "Se7en", and maybe "Brick"; among a few others. However, with the exception of the last movie, most are movies where the mystery isn't the main story's focus. If a movie is a mystery the story and/or the characters are uninteresting, unrealistic, or just poorly executed.

Directed by Paul McGuigan and written by Jason Smilovic, "Lucky Number Slevin" hosts an impressive cast. Josh Hartnett, who plays the lead, Lucky Lu, Bruce Willis, Morgan Freeman, and Ben Kingsley make this movie even more impressive. It's always hard to review a mystery movie. You have to be careful to not reveal too much but the description has to be good enough.

Slevin has been having a rough couple of days. He's lost his job, his house is condemned, his girlfriend cheated on his, he's been mugged, and, oh ya, two mafia bosses believe he's someone else and if he doesn't do what they says...he's a dead man. One boss wants Slevin to kill the other boss' son. The other boss wants a large sum of money the man who he thinks Slevin is owes. What unfolds is a series of interesting events that is both interesting to watch unfold and entertaining to see what Slevin says.

Yes, this is a really good movie. The writing of the plot is believable and entertaining. There are a few serendipitous moments but they don't feel like they're outside the realm of possibility. That's trouble that today's mystery movies have. The writing for the characters is also impeccably done. Josh Hartnett as Slevin some comedic lines that Josh delivers really well. I would love to see Josh play another type of character like this. Slevin reminds me of a character Ryan Reynolds would play, but Josh does a great job with the role. Lucy Lu is a delight to watch as well. She is spontaneous and charismatic. This is really outside the norm for the roles she plays. Usually she's uptight and high strung and controlling; not here she isn't and I would love to see her in a similar role. I do believe this has to be her finest acting role I have ever seen her in; and she's absolutely adorable in this. The only person I wasn't really hot for is Ben Kingsley. However, I've always had a problem with Ben. He usually tries to take just about any role offered to him in a way that reminds me of Christopher Walken. However, Kingsley has a lot of "misses" more than he has "hits". When he's in a movie, I usually groan at his appearance and character. The plot unfolds nicely, however, the wrap up tends to be a bit longer than usual. However, this isn't like a Riddler's riddle from the "Batman" TV show. You know, one of those riddles where you'd have to live in Gotham to actually get the answer. You are given all the clues and it's pretty straightforward. It's not a "Fight Club" ending shock, but it is executed perfectly. Watching this movie was a real pleasure and I was sad to see it over as quickly as it felt. I would almost like to see a sequel made.
Posted by Film Geeks at 11:58 AM