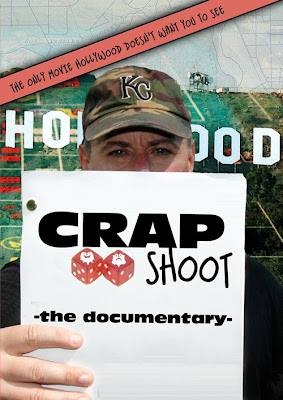 If you listen to our podcast (http://www.talkshoe.com/tc/14391), you'll know how much we rag on Hollywood for the utter drivel they put out each year. They expect us to buy tickets to see their rehashed sequels or remakes that they try to pass off as something new and exciting. Yet, when it comes down to it, crap is still crap by any other name and no matter how bright the box is - you're still left with a big pile of something smelly you really don't want.

This movie was written, directed, and stars Ken Close and also stars his narrator James Horton. The movie is not strictly a documentary as the movie title implies. This movie tries to be a non-serious approach at looking at how "crap" scripts get made into movies and what certain Hollywood people think about this. This movie has a lot of attempts at humor and some of the interviews are trying to be "The Daily Show" type interviews.

There really isn't much more to say about the synopsis than that.

This movie doesn't really work well for me. The comedy is not funny at all, the script that's there is horribly written. The ironic thing is that this movie proves the point that Hollywood's downfall is the lack of good scripts, and I just hope Hollywood didn't finance this movie. The main point that this movie gets across, which should have been the main focus, is that Hollywood doesn't want to take chances on scripts that have risks attached to it because they want assurance that they will make their money back. The rest of the "skits" are just filler used to waste my time. If Close would have confined his movie to a true documentary about the pitfalls of Hollywood then this could have been a really good movie and very insightful. It's really too bad that the only fun thing in this movie was a nice cameo done by Steven Spielberg. However, it's sad to say that he was the best actor in the film...and he wasn't all that good at his simple line read either. "This Film Is Not Yet Rated" this film is not, but you could compare it to a failed "The Daily Show" interview done by a high schooler. Listen to "Film Geeks" radio show on the Talkshoe website and you'll get a better take on Hollywood's suckfest than this movie did.
Posted by Film Geeks at 5:09 PM

I must respectfully disagree with your review. "Crap Shoot" is a hilarious satire of Michael Moore's so-called "documentaries." Its use of comedic acts to break up the interviews makes it the most entertaining documentary I've ever seen. But it is still a documentary, with very interesting insights into Hollywood's problems and how to solve them. I grade it a solid B.

Thanks for your comment. While I don't share your view of the movie, we thank you anyways. I don't think it's fair to call this movie a satire of Michael Moore's movies because there's no proof that this movie attempts to do anything like Moore does. The use of its so called comedic acts are really forced and I would really have to force laughter to find the "jokes" entertaining. If they treated the movie with a bit of humor but concentrate on giving a serious look at the suckfest of Hollywood this would be a really great movie. Thanks again though!

The drive-by script reading at Paramount? Trying to return "Showgirls" at Sony? That stuff is Michael Moore 101! Close even imitates Moore throughout the documentary. "Crap Shoot" is destined to become a cult classic.

Trying to get a refund for "Showgirls" from the movie studio was the only bit in this painful "documentary" that even approached funny.

Even if I agreed with the above opinion that this god awful waste of time was intended to be a satire/spoof of a Michael Moore film (which I don't), it would fail miserably in that regard anyway.

But more than anything I can't shake the feeling that this guy thinks of himself as the next John Stewart - and honestly thinks that he made a brilliant film that was both informative and hysterical. In reality it was neither. The "information" gleaned from the few interviews is common knowledge to anyone with even a mild understanding of the film industry. As for the other 80 unbearable minutes: I've seen fifth grade talent shows that were more entertaining.

If the information about movies and hormones this documentary uncovers is common knowledge, why does Hollywood still churn out so many God-awful movies every year? Also, how the guy know the economy was going to crash and burn? There's a lot more to this documentary than meets the eye.

The only thing worse than this documentary is the sense I get that every "anonymous" poster backing it up on blogs and IMDB is actually Close himself.

I couldn't agree with you more. At least the other two directors I've had message me (1 positive and 1 negative) have had the gonads to use their name.

couldn't agree with you more, film geeks. 23 minutes into this thing and I already felt like my brain was rubbed with a cheese grater while at the same time being bored senseless. Honestly,the concept of this ill-executed doc might have made a kind of fun cable tv documentary. Unfortunately, Close's overuse of painful slapstick segues, subtitles and his own emotionless delivery just kill the concept- ironic given that the "science" of the doc is concerned with good scripts being able to illicit emotion.

In CRAPSHOOT, the execution is not far above some mediocre student film or public access production; including bad editing. Cutaway shots of Close occur too often and clumsily at that- so obnoxious it's agonizing.

Another part of the production that is just as painful is the production website. Claiming that Close is "As a top-notch research scientist and lifetime member of Mensa (the high I.Q. society)...", without really citing his credentials very clearly- the site seems to be more interested in legitimizing the filmmaker than actually promoting the film. Hate to bring this up, but frankly being a "top-notch scientist" isn't really germane to the creative process or promoting a film. Which brings me to my last criticism.

This filmmaker, while clearly well intentioned and earnest, has very little understanding of what it takes to make a decent documentary. His obsession(and distraction) with hormonal surging, scientific rationale, weak humor and so on instead of just researching the meat and potatoes of the creative process and the mechanics of film industry really makes me wonder if Close is just blissfully unaware of himself, the film industry and his own shortcomings. It might be an indication of why no one looked at or responded to his screenplay- and perhaps that is for the best. Let's hope that he ponies up his own funds and makes his super-saga of scientifically researched, hormone-engaging romanticism on his own time- remember the now infamous "COVEN" (pronounced with long "o", natch) in the equally hilarious and infamous "AMERICAN MOVIE"? I'm sure if it's anything like "CRAPSHOOT", we'll all have to ride that roller coaster- or at least watch the train wreck.

flameape I couldn't agree with you more. Well said and thanks for commenting!