A Guide to Recognizing Your Saints - Review

A Guide to Recognizing Your Saints 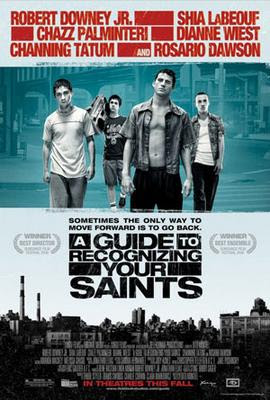 How come whenever I see a movie about 1980s New York I always get the feeling that people were always sweaty, loud, and full of hate and angst? You have movies like "Summer Of Sam" or "Do The Right Thing" or the other several dozen films about that time and place the portray these same type of people. I would have been more apt to believe in global warming if they said in the 1980s, global warming happened in New York City.

This movie has some of the same themes that "Do The Right Thing" had, but instead of racial issues this is a "coming of age" story. Written and directed by Dito Montiel, it is his own biographical story. He basically got to live the dream we all have of choosing who gets to play us in the movie about our life. He even gets to pick two! Robert Downey Jr. plays the older Dito while Shia LaBeouf plays the younger Dito. Other actors of note are Rosario Dawson, Chazz Palminteri, and Dianne West just to name a few.

The story is pretty simple. Dito keeps watching his friends get killed or acting bad and he's afraid he's going to stay in the same place all his life. He struggles to live long enough to travel to California (where supposedly there is no crime and all your dreams come true there). Being so young, however, makes it a struggle for him to cut ties and leave. This part of the story is told in flashbacks when the the older Dito comes back to his old homestead to take his bullheaded father to the hospital.

So ya, that's my take of the story. There is, unfortunately, not much of a plot here and there are certain things that don't make sense. Let me just tell you the best part of the movie first. All the actors used in the movie, both the young ones and their older counter parts are really good. I was very impressed with Shia LaBeouf's early acting ability as well as Melonie Diaz and Channing Tatum were good too. I also love seeing Robert Downey Jr. in pretty much anything and Rosario Dawson is not hard on the eyes at all.

The sad part of this movie is that I was waiting for the plot to emerge for so long that my brain got numb looking so hard for one. I don't really see how this story got made into a movie, considering that it's nothing out of the ordinary for the thousands of other people who left NYC for a place and time that wasn't sticky with sweat and in the 80s. The only thing that really carries this movie are the characters but without knowing what you want the final outcome to be or where it's going you kind of end up caring for them less.

The main plot point that made no sense to me was Dito questioning if his father ever loved him. In the flashback parts of the movie, you never EVER get a sense that his father doesn't love him. You see the father showing some affection to young Antonio, but that's clearly because Antonio's father beats him. Other than that, I thought it was quite clear that Dito's father loved him.

Another problem was that I didn't see why Dito wanted so badly to leave where he was. Either the movie didn't flesh that out enough or we're just suppose to guess. Either way, it really failed at that plot point.

I also have a couple of nit picks with this film. I don't understand the one scene where young Dito (LaBeouf) breaks the fourth wall to tell us he's the main character. I also don't understand why we read text of what is being spoken at certain points in the film. Finally, I don't understand what this movie is called "A Guide to Recognizing Your Saints". I'm sure if I read the book this movie was based on, I would; yet, that doesn't help me when I only watch the movie.

This isn't a horrible movie. However, without a clear plot and some plot points that are not explained or flushed out enough I was pretty lethargic about the whole movie. I loved the actors and the character they played, but without knowing where they were suppose to be going and the bits of random story elements thrown in, it really detracted from the whole story. I still don't know why anyone would want to live in the 1980's in NYC. Every movie that takes place there and in that time makes me feel like taking a bath afterwards because everyone is just dirty and soaked with sweat. If I could compare this movie to any other I'd say take one part "Angela's Ashes", one part "Kids", and one part "Do The Right Thing". Then take out all things related to a plot or social commentary and you have this movie right here.
Posted by Film Geeks at 3:54 PM

Summer Of Sam takes place in 1977. 1977 was not in the 1980's. Please stick with reviewing movies on your intellectual level such as Speed Racer or Transformers. Maybe even the new Hulk movie. It has lots of effects!

Nice blog indeed. I will always go back for your nice updates, Thank You for posting great articles with useful and up to date topics. I really appreciate your efforts in doing so! I hope to read more interesting topics from your blog!
Pass4Sure