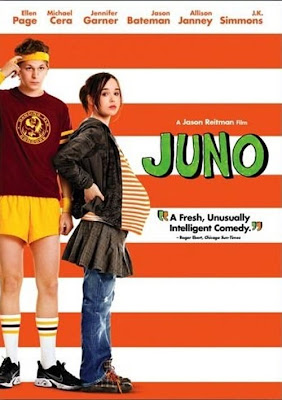 I'm always a little leery of mainly two types of movies. The first are so called "great" movies that come from the Oscars and especially those that are "independent". The second kind of movie that I handle with caution are those that are so called "coming of age" stories. It seems like everything today is heralded as a "coming of age" story. "The Incredible Hulk" is that coming of age story of a man dealing with his inner beast. "Independence Day" is that coming of age story of a small planet...called Earth. The only real thing that made me watch was seeing that both Michael Cera and Jason Bateman were starring and most of you might know these wonderfully talented actors from the criminally short run "Arrested Development" TV show.

This coming of age story (ha ha) is the tale of a sixteen year old girl named Juno MacGuff (Ellen Page) who finds she is pregnant from a one time sexual encounter with Paulie Bleeker (Michael Cera). After deciding against an abortion, she hunts the PennySavers to try and find the perfect, loving couple. Surprisingly enough, she finds a couple she likes right away, Mark and Vanessa Loring (Jason Bateman and Jennifer Garner). Now she must deal with the problems that come with being not only pregnant but being a 16 y/o pregnant "unique" girl.

This movie has some really great things about it. Its has a great cast with a lot of young and adult talent, you have a great director who knows how to handle these types of stories that are very escentric, and you have the first work of a very talented writer. I'll cover these in reverse order as stated.

Diablo Cody has come from being a stripper and from working in an ad agency to being ranked number 38th on Entertainment Weekly's list of 50 Smartest People in Hollywood. I can't say much about where she ranks with others on the list but her writing diaolog and style is wonderful. Her characters talk with the adolence of teens but with the sophistication of older people. For example, a lot of slang that Juno and her friend Leah (Olivia Thirlby) use incorporate a lot more terminology than the "sucks", "whatever", and "as if" terminology we expect teenage girls to use in movies. Her characters have a lot of great warmth to them. From a dad (J.K. Simmons) who seems almost hip, to a snarky but whitty convinces store clerk (Rainn Wilson). However, Juno is really the most well written character out of all of them and you can tell this was written by a female in the sense that most of the dialog revolve around women, and they get the best lines too (other than a few lines the dad gets).

The director for this is Jason Reitman who is probably best known for "Thank You For Smoking" which has kind of the same feel to this movie. The way I describe it is that this movie (as well as "Smoking") could take place in our real world but the people are either too weird or too smart and witty to actually be in our world. The sad thing is, the characters in these movies are just far too interesting to actually exist in the clusters they seem to do here. I do think that Reitman added a lot to the story with his ability to not bore you with the same shots and he wasn't afraid to leave some characters out of frame or not in focus or concentrate on showing you the emotions to every character all the time in every scene. Reitman also has the knowledge of being not only a director but also a writer (as he was both for "Smoking") and so I think balancing those two things helped him a lot with shooting this movie penned by another person. It also helped that he has kind of the same style characters that "Juno" has and so he knows what to do with unique characters and a normal looking story but really not that normal at all. If you watch this movie that last statement makes a bit more sense than what it probably does.

As you can probably guess, I'm not going to say too many bad things about the actors in this. Ellen Page is the star and she gets the best lines and the most time on screen to see who she really is. Page does a brilliant job of being who her character is suppose to be, a 16 year old high school girl, while also being a well rounded, knowledgable woman. She seems to teetertotter on the brink of maturity and immaturity. J.K. Simmons, who plays her father, probably gets the second best lines and he seems to take a backseat at times in the story but then he also seems to be one of the major characters. He seems to be a "Leave It To Beaver" style dad for the 21st century if I can be so shallow as to say something that sounds like something a professional reviewer would say that'd make you want to gag on shards of broken glass. Michael Cera doesn't really play that big of a role in this film and I can't say it's a bad thing. Not to say that he isn't talented or that I wouldn't have minded seeing more of his character get fleshed out, but he really wasn't a major part of the story. His character is what his other characters have been, that nervous geeky, yet somewhat cool scrawny kid you don't know whether to beat up or hang out with. Jason Bateman is kind of in the same boat here. His character is kind of background material here and while he does play a main part in maybe two scenes you can't really figure him out completely before he's gone. The biggest problems I have are with two of the supporting female roles, Jennifer Garner and Allison Janney (who plays Juno's step mother). They are quirky and they have their strengths and flaws that you see come to light as the story progresses. However, a lot of their motives are either deeply hidden or they aren't brought to light in the movie. For example, you don't really know why Garner's character wants a baby and you can't really get a feel for where Janney's character wants to go. At least Garner has a decent role to work with and she does a much better job of being a supporting actress than she does in the mail roles she has been playing. Still, there is something big missing from her character.

Alright, Hollywood, you win this round. I watched and adored a movie you picked for an Oscar. I'll call it a fluke this time and hope I never repeat this patern again. In all seriousness, the writing done by Diabol Cody and the wonderful acting done by Ellen Page make this movie. If Juno was the only character in the film, I probably wouldn't change my feelings about it. So with that said, when you have some great characters like Juno's dad, Leah, and Paulie Bleeker added to enhance the character, it can only help the story and character. I can't comment on whether this is a real coming of age story, but I do know that this is a really smart and hilarious comedy that not only tugs at your funny bone but also makes you exercise your movie mind. The characters seem out of place in a real reality but they are smart and at the same time flawed and not quite as mature as their dialog makes them seem. They seem too perfect at times but at other times feel so flawed. This is by far a bad thing to say, because this is what makes the characters so charming and the writing so funny and intelligent. If you like grown up comedies where you can't see an Adam Sandler or a Mike Meyers for miles around, I'm pretty sure you'll enjoy the show.
Posted by Film Geeks at 7:31 PM