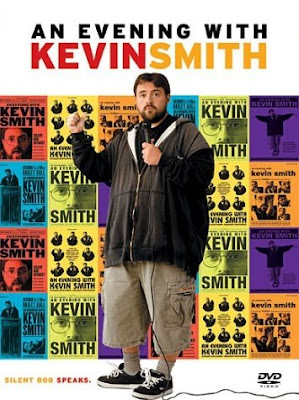 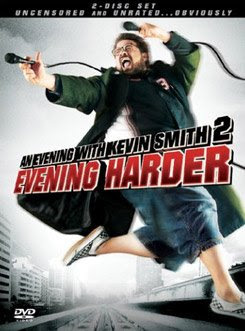 I'm a big, big fan of Kevin Smith's work. His writing and story settings are genius; not to mention he's a geek. "Clerks", "Mallrats", "Chasing Amy", "Dogma", "Jay And Silent Bob Strike Back", "Jersey Girl", "Clerks 2", and the soon to be release "Zack And Miri Make A Porno" make up the body of his directorial work. I love each film and his commentaries for all the DVDs make owning one DVD seem like you're getting two. My writing of these two movies is more directed at the casual fans who like some of Smith's films but haven't watched everything else he's done.

This will be a somewhat shorter review because these two movies are about Kevin Smith, with guest appearances by Jason Mewes and a few others, standing in front of a group of college kids (AEWKS 1) and a Canadian and English audience (AEWKS 2) and answering questions and sharing stories.

For most any other director this would be dull and an episode of "Inside The Actor's Studio" would be sufficient. However, with a writing genius that Kevin Smith is whose movies are based mostly around dialog, this is a fascinating set of films.

The worst part about these movies are actually the fans/questioners themselves. You have to give Smith a lot of patients not to choke a few of the people out who act like complete morons. Instead, he uses witty banter to make fun of the really bad ones.

All that aside, Smith is able to steer the conversation into some very interesting and hilarious stories. If you know Kevin Smith and are a fan or listened to his podcast he does with Scott Mosier called SModcast, you know Smith holds nothing back from his fans. He has an opinion on most things and if there is something Smith believes is sacred I have yet to hear him utter, "I won't talk about that" or "That's pretty private". The man will talk about anything and it's amazing how some of the really perverted stories or items of knowledge you might not want to know about a person let alone a very talented director are incredibly funny.

The following are just A FEW topics covered on AEWKS 1 and 2 that make it a must watch:

AEWKS 1
- Writing a Superman script and why "Wild Wild West" sucked so much
- A story of singer Prince that makes you thankful you are not famous like that
- The first time Kevin had sex with his hot wife
- How Smith writes and how he finds material
- Protesting your own movie can be fun - we need more glitter!

AEWKS 2
- There can be only one Holy Trilogy - "Star Wars" Vs. "Lord Of The Rings"
- Backlash received from the first "An Evening With..." DVD
- How becoming a father has/hasn't changed Smith's life and the shows kids watch
- Shooting his wife for Playboy
- Kevin Smith Vs. The Media and how really works

For me to quote anything from the DVDs would be taking things out of context and not fun at all. Smith uses his golden potty mouth and sexual references to tell very interesting stories and jokes.

I have watched both 1 and 2 multiple times now and I still laugh just as hard. I can't wait for the third DVD to be released. Kevin Smith has the patience to deal with the audience questioners where as I would have to smack a lot of them. He does a great job steering the conversation but also expanding and digressing into other stories. How he has so many funny stories and how he can tell them so well is a testament to just how good his film are. The Prince story told in the first movie is, I think, the best story so far. Also the crude humor that I usually don't go for is hysterical. The only negative thing I can say about 1 and 2 is that Jason Mewes is almost a worthless surprise guest. He misses both his cues to come out on stage for both movies and he seems like he doesn't want to be there or add anything worthwhile at all. That aside, if Kevin Smith taped every Q&A he did and put it out on DVD, I would own every single one of them and watch them multiple times. Pick these movies up to be entertained by a talented director, a funny storyteller, and a director that will tell anyone, anything they want to know about him.

Really appreciate this post. It’s hard to sort the good from the bad sometimes, but I think you’ve nailed it!!! Very important topic and you just did an amazing job presenting it in a simple and clear manner.
Real Exams

What a site yaar? Really different and stuff work. I am your new visitor to your site. So I feel happy to be here. Now only I have got a wonderful site through Google to gather more information. I am stay tuned here for your next blog. Furniture Manufacturer in India

I read your post. That was amazing. Your thought processing is wonderful.
The way you tell the thing is awesome. They are inspiring and helpful.
thepriselive

I am very happy to be here because this is a very good site that provides lots of information about the topics covered in depth. Im glad to see that people are actually writing about this issue in such a smart way, showing us all different sides to it. Please keep it up. I cant wait to read whats next.