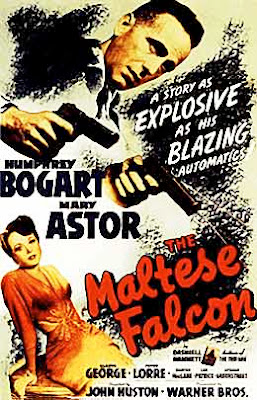 This movie is a staple of not only classic film noir but is also an example that Hollywood use to make good movies once. Filmed over a two month period and for the extravagant price of $300,000, the movie hosts smart directing, crafty writing, and a gala of talent that is not seen today. Of course, this is one of the first movies to be a remake of the original (the original being only ten years pervious in 1931, which was directed by Roy Del Ruth and starred Ricardo Cortez as the principle character). This is a movie which earns its accolades and is an enjoyment to watch in an age where extreme violence and nudity are a "must have" for you mystery/action/thriller movie.

Private detective, Sam Spade (Humphrey Bogart) finds himself hounded by police and ruffians after his partner, Miles Archer (Jerome Cowan), gets gunned down on a case they were working on. Spade must find out what the real motives of the beautiful dame, Brigid O'Shaughnessy (Mary Astor), who hired them was really up to, who killed his partner, and find out just exactly what he's in the middle of. He comes to find out that the object of everyone's desire is an ebony falcon from Malta that is suppose to be covered in gold and jewels and from the ancient past. Sam's loyalty to the job and to the memory of his old partner is tested against the girl he might be in love with. He must also battle wits with the men; Kasper Gutman (Sydney Greenstreet), Joel Cairo (Peter Lorre), and Wilmer Cook (Elisha Cook, Jr.); who aren't afraid to kill him if Spade doesn't have the leverage of where to find the sought after bird.

John Huston not only directed this movie but he wrote the screenplay from the novel by Dashiell Hammett. The movie is pretty much scene-for-scene and line-for-line exactly like the novel. Huston used storyboards that allowed him to focus more on camera movement and how a scene is set up which anyone looking can really tell the class that John Huston shows in his first directorial role. This film helped to define him not only as a bankable director/writer but also as an artist and credit to his profession.

When watching the acting in this you have to take in the fact that acting styles have changed since the early times of the industry. When a mystery movie wants to add tension you have the actors hold position and time almost seems to stand still. Lines today are delivered slower and are weighted to add tension. In this film, the acting is excellent when you watch it with an eye of the time. Sam Spade is your heartthrob character who makes it by the skin of his teeth but tries to put it out there like he knows exactly where everything is going. From the slight smile Bogey puts on his character you believe he has the case wrapped up - he just hasn't put all the puzzle pieces in place yet but he knows what the picture is. I bet you George Raft kicked himself for turning down this role later. Mary Astor in here delivers her lines very nicely and you can never get a handle on who she really is, which is the point of her character. The first acting job of Sydney Greenstreet is done marvelously. His character, Gutman (what else would you call a close to 400lb man?), has an err of gentlemen gangster. You just don't find that breed of criminal anymore. Not quick to anger and wanting people to take him at his word, even after he drugs you and has his henchmen kick you in the face. The characters deliver their lines a little bit too fast, but as I said, this is a different acting style that we are use to. Of course, it could be that Huston wanted Spade smarter than the audience watching it which is a gamble, especially in today's world of Stallones and Schwarzeneggers, where you don't have to worry about moving faster with their intellect.

Because Huston didn't change much to Hammett's novel (hint hint Hollywood of today), the story is amazing. You never really can figure out what happened until the Spade figures it out piece by piece and then he figures it all out at the very end and you feel as if you're only a step away with him talking out what happened. This type of mentality makes you feel a bit like Spade's Dr. Watson to his Sherlock; he's a little bit smarter and faster than you but you're right on his heels. The range that Spade has to go through lends a testament to the greatness that Humphrey Bogart was as an actor. Spade must act for the different people he meets to find out what he can but he also struggles with duty over love. The final reveal of who the killer of his partner had me in a tizzy and it's great to watch this classic movie in high definition for content and acting. I do have one little gripe, the audio quality is not as it could be. I do not know if it was a compression fault or just degradation of the film. Still, the writing of a great novel comes through in the three fold dimensions of directing, writing, and acting.

There are some movies that are popular because people are told they are good. There are some movies that are popular because they are, indeed, great. This movie is the latter. John Huston shows himself to be a credit to his trade not only as a director but also a writer. He allows the original work to speak for itself and he only adds the pictures. Bogart is still the man as ever and he's still charming for today, even he does use "sweetheart" and "darling" that seems to almost diminish the female characters. Mary Astor does a great job of keeping you guessing to what her character is really all about and whether or not she is lying and when. Greenstreet's Gutman wonderfully portrays the old romantic gangster image of a gentlemen criminal. The cinematography shows the classic film noir style and it's a sadly missed style, in this reviewer's humble opinion. In today's crapfest of Hollywood rehashed and unoriginal dreck, this movie is "the stuff that dreams are made of".
Posted by Film Geeks at 12:24 PM