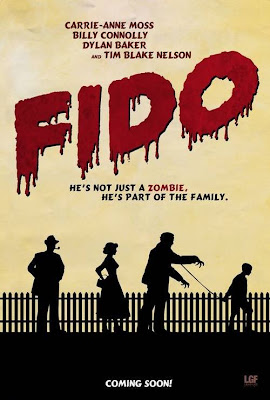 Recently, it seems as if the zombie genre has been teaming up with an unlikely partner - comedy. With the recent success of "Shaun Of The Dead" zombies can now be seen in a comedic light, and not just unintentional comedy either. "Shaun" is not the first movie to mar the two elements into a movie, Peter Jackson's "Dead Alive" is not only a zombie comedy but I think it's one of the most disturbing and just plain weird movies ever made. You also have "Army Of Darkness" lend a bit to the two genre combination. This movie is attempting to follow in the footsteps of movies like these.

This movie is a bit odd. The time that it takes place in is never revealed but it appears as if it's the future but we've reverted back to the 1950s. The movie even opens up with a 50's style newsreel about the zombie war. So mankind had fought against the zombie horde and pretty much won. They have developed communities that shelter themselves from attack and ZombCo has developed a control collar that stops a zombies craving for flesh and will take orders from the owner. That's all back story to a young Timmy Robinson (K'Sun Ray - seriously that's his name) who befriends a zombie he names Fido (Billy Connolly - yes Il Duce!). Fido is Timmy's only friend and his home life seems as if he more gets in the way of his parents, Bill (Dylan Baker) and Helen (Carrie-Anne Moss - she not butch or in leather in this one!). Fido's collar has problems one day and he eats part of the next-door neighbor. The story is about Billy protecting Fido and Fido learning his place as an undead person. Imagine it a bit like "Old Yeller" but instead of a dog it's a zombie!

I really liked the 50's feel to this movie but there just wasn't enough plot for me to really get interested. The mom seems to switch character stance half way through the movie without explanation. Timmy also quickly changes from not liking zombies at all to loving one. It's the lack of caring about anything else that's really going on in the movie that hurts it. I would have liked to seen a focus on Timmy and Fido but you don't really get that. The scenes we do see are kind of sporadic in what the movie is trying to focus on but it never really stays with one for too long. My least favorite part is Fido doesn't end up needing his control collar...for some odd reason. This was the turning point where I just cared a lot less about the movie because it made no sense. The mother becomes my favorite character when she starts caring about her son (again for no reason whatsoever) and it's fun to see Carrie-Ann Moss pull off a 50's mom. Billy Connolly as a zombie is hilarious to see but his character changes from being a zombie to being a zombie who can control his urges. I wanted to like this movie more but without more of a plot and the constant changes of the character it's really hard for me to like this one a whole lot.
Posted by Film Geeks at 8:40 PM