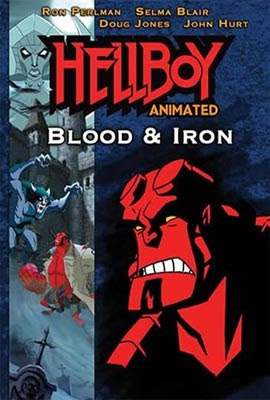 This is the second Hellboy animated movie I have seen. The animation style is the same, the main characters voiced by the same actors are great to have back, and the story seems as promising as "Hellboy Animated - Sword Of Storms". I did like the first animated movie which had a decent storyline, some good writing with classic Hellboy lines, and some knockout action. Will this one hold up to the last one?

There are two stories that combine into the main plot in this movie. The first is shown in flashback form where we watch a young Professor Bruttenholm in 1939 hunt a female vampire who uses the blood of many young women to keep herself looking young and beautiful by bathing in it. The other story takes place in modern day where the BPRD (Bureau for Paranormal Research and Defense) are sent to investigate a haunted house. Later we find out someone, or something is trying to bring back the female vampire that Professor Broom destroyed long ago.

There are many problems I have with this story over the other animated movie. First of all, there is little to no action in the movie. Hellboy just ends up fighting some snakes and an iron tomb towards the end. There is no huge battle of ancient gods like in "Sword Of Storms". Abe is tortured in one scene and is later Willey Coyote healed enough to run to help Liz. Liz doesn't do anything in this one except burn some phantom wolf pack that I have no reason why they where there or what their motives were. Second, to get all the main characters into the haunted house story line boarders on horribly written 1930's sci-fi dialog. The Professor says he "has a feeling" and that Abe, Liz, and Hellboy all must go with him. Third, the body count in this is low with only one human death. Finally, the best character in the movie is the Professor. The movie is called Hellboy, not Professor Broom. Yet, he has some of the better lines whereas Hellboy just says "crap" one too many times. A big pet peeve I have with this movie is the title itself "Blood and Iron". Okay, I get the "blood" part; vampires and all that jazz. However the only thing remotely "iron" is some iron maiden device (used to drain blood from women) gets turned into a fighting monster from an hellish god that wants Hellboy to join her and the rest of Hell's legions and stop fighting for the humans. This storyline has nothing to do with anything else in the movie and is just out of place overall.

While there are a few good things about this movie, nothing stands out like "Sword Of Storms". I'd pass on this one and watch the other one.
Posted by Film Geeks at 9:17 AM

Dude, I gotta disagree. I should maybe start by telling you that I have never in my life read a comic-book but really enjoy a lot of the recent film adaptions (including the orinal animated HB adventure and the recent animated Batman DVD). To my mind this second animated HB is vastly superior to the first. Yes, there is less action in this one but the story is so, so, sooo much better. The script actually would make a decent Live-Action HB flick. The flashbacks work perfectly and John Hurt deliveres a perfect performance.To each his own obviously, but I did enjoy the second much more!
Greetz,
Christian