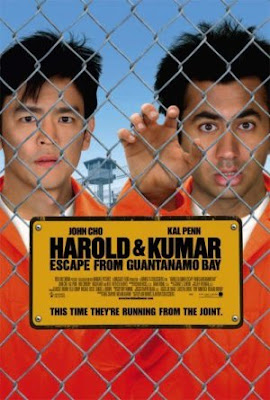 So this really isn't the type of movie I go for. However, on the advice of a friend I watched the first one, and to my surprise I didn't hate it. It wasn't the funniest movie I ever saw, but it was just so random and zany. That's right - zany. So when I saw that Harold And Kumar would be back for a sequel I knew I'd be watching it. While I didn't go out to the theaters and watch it, I did bump it up on my Netflix queue (Follow My Netflix Activity). Then I had to wait a little bit after receiving it. For movies like these, I have found that I must be in the right mood in order to get any enjoyment out of it. For example, this movie is not one that I would ever watch after just waking up from sleep. It's also not one I'd watch right after church. The best times for movies like these to be enjoyed is to watch it late at night after a bit of Mountain Dew. Wow, I'm a plugging whore today.

This time Danny Leiner, who directed the first installment of H&K is gone. In his place are the writers for the first one, as well as this one, Jon Hurwitz and Hayden Schlossberg. John Cho reprises his role as Harold Lee, Kal Penn reprises his role as Humar Patel, and how can you have a Harold and Kumar movie without Neil Patrick Harris as Neil Patrick Harris? A few of the other people from the first movie are back as well but don't really play that big of a role this time.

If I give away some of the plot here it won't matter since the entire story is about the journey rather than the destination. It's the following day after Harold and Kumar come back from White Castle and they are set to travel to the weed capital of the world, Amsterdam. Yet, they don't quite make it on this trip as the passengers of the plane mistake Kumar's crazy antics for terrorist activity. This makes government agent, Ron Fox (Rob Corddry), giddy enough to throw them in Guantanamo Bay without a trial or phone call or any such basic rights. Once there they escape, travel with some Cuban refugees to Miami where they must make their way through the south in order to reach Texas and appeal to an old college friend who's friends with the President and can get them out of trouble with the law.

This one doesn't quite have the charm of the first movie. Although with the first movie I can put my finger on where the movie somewhat looses me (the riding of the cheetah), this one never got a hold of me like the first one did. There are some funny parts but it fails to hit my funny bone enough to make me laugh out loud. It will be strange seeing John Cho play Sulu in the new "Star Trek" movie and take Kal Penn's character in "House, M.D." as serious. NPH doesn't surprise me as he did in the last movie. Although he does get the "ride a weird animal" scene this time. Yet the last time we see his character, it's just - odd and not enjoyable. You can tell this movie was going to be a straight-to-DVD movie (which it was at first) because it makes you feel as if you are watching any of the "American Pie" movies after number 3. This movie is a mix of that along with "All About The Benjamins" in that it seems like an excuse to through in some nice cars, a few hot women, and smoke weed. It's nice to see a look back at H&K when they were in college without having to resort to a "Dumb and Dumberer - When Harry Met Lloyd" deal. This movie is just a bit too boring and fails to excite. Probably the worst part about it is that it tries to make a point towards the end. They should have really warned me that I was suppose to be paying attention for things like that. H&K 2 better be careful or it will fall into bad B movie territory if it's not careful. If I can say one good thing about it, it's this - I can say two good things about it. There is a really funny spoof on President George W. Bush and second there's a really cool poem (cool if you're a math nerd) about the square root of 3.

"I fear that I will always be / A lonely number like root three / A three is all that's good and right, / Why must my three keep out of sight / Beneath a vicious square root sign, / I wish instead I were a nine / For nine could thwart this evil trick, / with just some quick arithmetic / I know I'll never see the sun, as 1.7321 / Such is my reality, a sad irrationality / When hark! What is this I see, / Another square root of a three / Has quietly come waltzing by, / Together now we multiply / To form a number we prefer, / Rejoicing as an integer / We break free from our mortal bonds / And with a wave of magic wands / Our square root signs become unglued / And love for me has been renewed."

Definitely be in the right mood to watch this, and don't expect this to compare to the fun you might have had with the first one.
Posted by Film Geeks at 11:33 PM