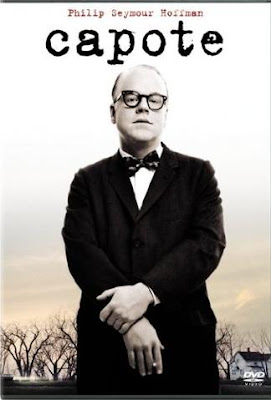 Bio-pics can be really interesting movies if they are done about interesting people and the story isn't over dramatized or too romanticized. This applies more to today's bio-pics where we want to see a more human side to the characters the movies are about. For example, "PT 109" is a great movie. However, the story came from the somewhat fictionalized story of John F. Kennedy's naval experiences that were printed by his family in the Reader's Digest. Today, "PT 109" would probably show Kennedy not as a wholesome, lone hero but as more of a scared and unsure leader. Either way, a bio-pic should not loose the intention of being the subject about a life or a series of events in a celebrity figure's life.

In 1959, Truman Capote (Philip Seymour Hoffman) is a man out of place for his time. He is openly homosexual and has a very feminine sounding voice. He's also a world regarded author. His previous work, "Breakfast At Tiffany's" has already become a classic cinema and now he starts working on what would become his most famous writing. On November 14, 1959, in Holcomb, Kansas, two men break into a house and kill a family of four. Truman sees the news article for the murders and travels to Holcomb to see if there is a story to be had. Capote becomes very interested in the case and he believes it would make a good book; it's what would later become "In Cold Blood". When the killers are arrested, Capote arranges for him to have access to the prisoners and strikes an affinity with them and one in particular, Perry Smith (Clifton Collins Jr.). Truman helps the men to get a better lawyer but this has unintended consequences for him since a longer period before the two are to be executed means the author has no real ending. Truman Capote must deal with his feelings towards the two men and carrying out what will become his most famous book.

I have two questions. How did anyone like this movie and how did it get nominated for five academy awards and win one?

This movie has no direction or semblance of a coherent storyline. The directing was done by Bennett Miller and Dan Futterman did the screenplay. I don't know if it was the script or the directing but this was one of the most shotty movies I have ever seen. This movie loves to end scenes for no reason, it has scenes that last for about five seconds before it moves on, and it has elements that I couldn't figure out. I'll give an example of each respectively. Capote is talking to Perry Smith for the first time and after saying "They put you in the womans cell" and padding out the scene for a few minutes, it just ends. There's a scene where Capote goes to Spain before he can get Smith to talk about the murder that just shows up for a fade in and a fade out and then a year passes. Lastly, there's a scene where Truman is making a phone call from a phone booth and a man is starring at him. I thought maybe the man was following him for helping the two murderers but nothing is ever said on that subject or anything else. This movie has OCD; it does or the editor just cut stuff out randomly. The movie cannot stay on any one scene and it makes for a discombobulated movie. I almost felt seasick watching it.

How did Philip Seymour Hoffman win best actor for this role? It is nice to not hear him talk like he's been up for three weeks straight (like he's talking a bit like Henry Kissinger) but I've seen kumquats emote more than he did in the movie. This movie didn't take a risk and show Capote's homosexuality either. On top of that, this movie failed at showing either he cared for the two murderers or he was only using them. What's worse is that last half of the movie is watching him yo-yo between these two emotional states and see his almost relief that the two men he claimed to care for are finally going to get killed so he has a good ending to him novel. Hoffman might have been judged more on his portrayal of how Capote acted, but if that's true, this movie wasn't even worth making. David Strathairn deserved the Oscar for "Good Night, And Good Luck" over him.

It must have been a slow Oscar season for 2006 because I don't see how Catherine Keener got nominated for supporting actress. In fact, no one, other than Clifton Collins Jr. seemed to have an important role in this movie. In fact, I think Collins should have gotten the nomination over Hoffman, because the only good scene in this movie is when he's describing how the murders took place. Other than him, no one else stands out in the least.

I do have to admit that it's interesting to note that the real Truman Capote was ahead of his time in how he wrote "In Cold Blood". In fact, I'd go so far as to say he helped to set up Hunter S. Thompson's typical style label. Truman Capote seems to have been the first Gonzo journalist with this book. He becomes part of the story and gets involved with a main element of it. He also tends to blend both fiction and fact, or as he calls it, a true crime novel.

Nominated for an Oscar for best motion picture, best performance by an actress in a supporting role, and best writing for an adapted screenplay, and winner of best actor? Really? This movie should have been laughed off the screen. The cinematography is atrocious. The director seems to think that if he plays out a scene or stays in one place that the audience will become bored. The acting is nothing to compliment anyone on, other than maybe Collins. Also scenes not easily figured out as to their importance are thrown in and never mentioned again. I've never read the book, knew anything about Truman Capote, or anything about the case. As a result of this movie, I never will. This movie should not have been nominated or received any awards. I remember why I try to forget the movies that came out in 2006. Optimus Prime should have won best actor over this movie.
Posted by Film Geeks at 4:10 PM

If you'd like to redeem your feelings about Capote, his story and a very small, but significant part of it, I would HIGHLY suggest you watch Doug MacGraths version titled "Infamous". As much as you hated this one you will (Probably) you will LOVE the other. Make the time to watch it twice; once without the director's commentary and one with. Absolutely the best discription of how a movie is made and the background built.

I would like to thank you for the efforts you have made in writing this post. I am hoping the same best work from you in the future as well.