Indiana Jones And The Temple Of Doom - Review

Indiana Jones And The Temple Of Doom 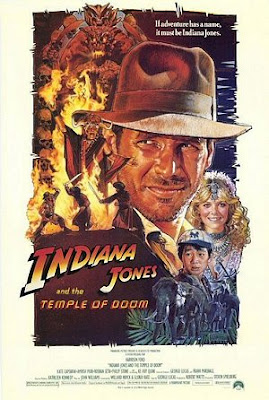 The year is now 1984. The year of "Ghost Busters", "Gremlins", "Search For Spock", "The Karate Kid", and a number of other well known classics were released. 1984 also marked the year of the second Indiana Jones movie which is actually a prequel to "Raiders Of The Lost Ark". While it took in more than 175 million, the reception by critics and some fans were not as thrilling as they were for Dr. Jones' first adventure. The darker feel and the greater amount of violence actually made the MPAA (*spits*) create a classification stronger than PG but less than R. "Temple Of Doom" helped to create the PG-13 rating.

There is just one side note this time that I have to make regarding "Doom". Many people consider this to be the "worst" Indy movie. While I don't think it's the best, I definitely don't believe this to be a horrible movie. I believe many people are basing their opinions on what they read today of what the critics back then said. If you were young when you saw this movie, I don't think any of us thought this was a horrible movie. After all, Indy is back with his hat and whip!

This movie starts out a little bit different than what the other two movies do. It's different in that the opening is not a separate mission that ends when Indy returns to the museum and gets his real mission. This opening give us our characters we'll be following right off the bat.

So Indy starts out in China at "Club Obi Wan" (get it?!) where he exchanges the ashes of an early Chinese emperor for a diamond. Right off the bat, I have a problem with this film. Dr. Jones is trading a historic find for a measly diamond? We're not even told why the diamond is significant and Indy ends up leaving it behind anyways. So Indy gets poisoned and a fight breaks out where not only does Indy skewer a guy with a flaming kabob but he literally punches a woman for no reason. Wow, I'm glad I watched this movie last or my image of Indy would have been soiled. Indy rescues and escapes with a singer from the club, Wilhelmina "Willie" Scott (played by Kate Capshaw, who would later become Steven Spielberg's wife). They make their break out of China with the help of Indy's partner, Short Round (Jonathan Ke Quan), a little kid that Indy took under his wing. Indy drinks the antidote he took from the guy he was trading with and they head back to America. On a side note, the weirdest cameo in movie history is in this movie. Dan Aykroyd shows up for five seconds to get Indy, Short Round, and Willie on a plane. Talk about random.

To bad the pilots flying the plane work for the guy who tried to poison Indy. They dump the fuel and jump out of the plane while the three are asleep. Before the plane crashes, Indy and company inflate a raft and narrowly avoid being in a fiery crash. However, they do get to sled down a treacherous mountain and over cliffs only to make it to a river and finally land on an India village shore. The villagers believe Indy was sent from the heavens to help them get their kids and a magic rock back from an evil sect that worship an evil god.

This is my biggest problem with the movie. In the other two movies, the adventures were about big historical treasures from the Bible, the Ark and the Grail. This movie is just about some rocks that glow. They don't really do anything. Do they melt people's faces? No. Do they turn people old really fast? No. They don't do anything but glow. Not to mention they look like big bread rolls.

The trio make their way to a palace where Indy believes the stones are being help. While staying there he finds a secret passage that leads to an underground cave where the sect is worshiping their evil god, Kali. However, unlike "Raiders" that had snakes, this movie has bugs...lots of bugs in the secret passage. I can handle snakes and rats, but with all those bugs I would definitely get freaked out. Indy and company witness a human sacrifice to Kali in which the high priest rips out a man's heart but the man is still alive before he is cast into a pit of flame and lava. This scene is probably the coolest part of the entire movie. This also marks the spot when you can start to tell the difference in how this movie is darker than the previous.

Indy, Short Round, and Willie get captures. Indy is made to drink this blood that makes you into a blind follower of Kali...somehow and somehow you know all the rituals, Short Round is put with all the other villager kids to work in the mines to uncover the remaining two rocks needed to complete the set, and Willie is going to be offered as a female sacrifice.

Who saves the day? Indiana Jones? Nope! Short Round breaks free and goes in to rescue his friends. He ends up burning Indiana which knocks him out of his trance. Indy fights the guards and saves Willie from certain demise. He then gets so ticked off that he decides to liberate all the kids from bondage. This marks the first really decent action sequence of the whole movie. You have Indy fighting the bad minions and you have the infamous escape with the mine cars. Even Short Round gets to beat up a kid who is under the influence of the Kali blood stuff. Willie...well she just screams in a high pitched voice and says "Indy!" a lot in a shrill and ear piercing way.

They make it out of the mine and are caught on a rickety suspension bridge by the high priest who wants the stones Indy took back. What does Indy do? He anchors himself on the bridge and then cuts the rope, sending most of the high priest's minions to the alligator infested waters below. Indy and the high priest fight on what's left of the bridge where Indy almost gets his heart ripped out. However, he somehow knows the words to make the stones do something. In fact, all they really do is set the bag on fire and all but one drop into the waters below. The high priest grabs the final one only to burn his hand and fall to the depths of alligator way. Indy has saved not only the children but also the village's sacred stone. Woo hoo?

There are just two small gripes I have with a couple of the final scenes. First of all, towards the end, Indy is fighting with two guys with swords like the big guy had in "Raiders". Indy reaches for his gun only to find that it isn't there, unlike in "Raiders" (see my review of that movie for further details). However since this movie technically comes before "Raiders" chronologically. This joke only works for the audience and not Indy who has not done his "guys with sword skills get ironically shot with a gun" trick.

Second, when Indy and his gang first enter the village they are offered food that Indy says is a lot for the starving people. So what happens when these thousands of kids come back who are scrawny and tired of working in the mines? They are going to need a lot of food which the village is limited on. Even if the "magic rock" helps the harvest, it won't be quick enough. A lot of the village will probably die, maybe even more since the kids have returned. My point? Well I can't really say that the kids should have been kept in bondage, but food doesn't grow on trees!

This movie is my least favorite of the three, but as I said, I am using the grade I thought it was before I heard all the negative opinions about this movie. You still have some great Indiana Jones fight sequences, his humor, and great locales. It's hard to determine who is more annoying...Willie or Short Round. I'm glad neither has made an appearance since then. Also the love interest in this movie is a little awkward in that it goes from the two of them fighting to all of a sudden wanting to get it on and being all lovey dovey. You don't have that tension and then slowly winning her over like you had in "Raiders" with Marion. Yet, who cares? Indiana Jones is still knocking heads and finding treasure to the entertainment of the 10 year old me and even the today me. I get to see Indy punching people with the force of concrete, escaping traps in the knick of time, and using his whip to swing, to hurt, and even to get a little sugar. Sure it has many faults, but Indy still has the honor and glory in this one as well.
Posted by Film Geeks at 4:33 PM