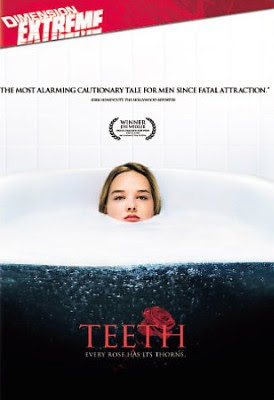 When I first saw this movie trailer I thought it was going to be one of the best dark comedy movies every. It had all the markings to be a great horror comedy. However, could this movie live up to being one of the greats along with "Death To Smoochy", "Doctor Strangelove", and "Fargo"?

High school innocent, Dawn (Jess Weixler) works hard to protect her virginity and the virginity of her peers. She's an outcast in her school and by her stepbrother, Brad (John Hensley), who doesn't make it easier with his wild lifestyle. However, Dawn's meek lifestyle might be the result of something else...unnatural.
After one of her friends almost rapes her she finds that she is the embodiment of the vagina dentata myth. That is, her vagina has teeth! She must cope with her pure lifestyle and trying to defeat the monster within her.

Now come on, after a story plot like that how could anyone NOT watch it?! Did you miss the part when I said, "HER VAGINA HAS TEETH!

I was so sad what this movie was and what it wasn't. First of all the story moves way to slow. It takes almost half the movie to get to anything important. Second of all there was little comedy to this movie. There were really only a few funny scenes. One being the OBGYN checkup and the other being when she finds out her hero is really a jerk. The disappointment I have should be felt by all. After all, how do you screw up a dark comedy that involves a woman's lady parts having teeth? The only real classic bit to the movie is that you don't see the fanged creature so it leaves you guessing as to what it is. However, with the myriad of shots of a nuclear reactor, the subtly is lost on how it came about. Sad to say, the only really cool part of the movie was the opening credits. Usually, this is the part I fast forward until it's over because in most movies, nothing revealing happens. Yet, these credits show you a preformed Dawn making her way in the womb. It's pretty neat actually.

I do have to make a little snippet against this movie's political views. This really shows a bias against Christianity and its message of waiting til marriage. It kind of reminds me of "Saved", in that both are neither really funny but bash a good institution. The characters are shown to have trouble remaining pure to the extent that it's an almost impossible task. That's just complete horse hockey and Hollywood has been doing these slights against Christianity and the wanting of waiting till marriage to have sex for quiet some time now. There previous attempts, as well as this one, shows how low most movies look at Christianity and the role of sex in our lives.

Yet, even I can put aside my dislike for the message and enjoy a movie. After all, I really liked "Dazed And Confused" and actually agreed with its message. Yet, the almost nonexistent care for this movie still remained for me. This could have been a really funny movie, but with the very slow pace and the little comedy that was in it made it boring and almost worthless. If the movie didn't take itself so seriously and tried to be a true dark comedy (that is threw in more than two funny scenes), it wouldn't have been a bad dark comedy. Come on! The story was about a girl with a killer vagina! A vagina with teeth!
Posted by Film Geeks at 2:52 PM