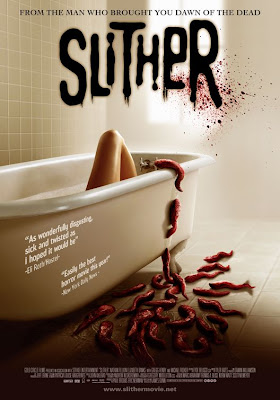 We can give credit to "Shawn Of The Dead" for really taking the reigns of what the "comedy horror" genre is suppose to be. Not only does it have to function completely on it's comedic elements if the movie were split in two, but if you take out all those parts it'd have to work as a great horror movie. What "Shawn" did for the zombie flick, "Slither" is intended to satisfy the comedic horror of the B movie genre.

James Gunn, writer of the 2004 hit "Dawn Of The Dead", takes over the role of both writer and director in this flick. This also gave Firefly/Serenity fans another chance of seeing Nathan Fillion on the big screen and in a charming, egocentric character like he was in Firefly. Fillion plays Sheriff Bill Pardy. He is also joined by Elizabeth Banks who plays Starla Grant, Michael Rooker as Grant Grant, and even a short appearance by Jenna Fischer (aka Pam on "The Office") as Shelby.

Our story takes place in a small southern town. A meteor crashes in the town's woods and a creature emerges. Grant Grant (yes that's his character's name) stumbles upon the creature after a trip to the bar. The creature injects Grant with an organism that burrows through his chest and into his brain. Grant begins to crave raw meat of any kind and slowly begins to deform into some sort of creature. Before he fully transforms too noticeably he gets into a fight with his wife, Starla, and almost kills her. However, not before Sheriff Pardy and his deputies come to the rescue and save her. They too witness Grant's metamorphism where he appears almost squid like.

Grant runs away and we also learn that the creature inside of him has tendrils that have attached and injected a woman he captured with thousands of offspring...slithering offspring. She looks a little like the picture below: 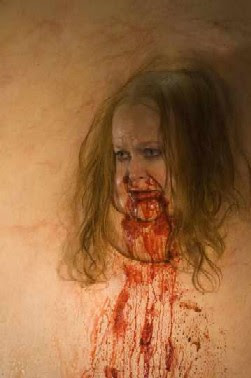 She is huge! After a few days of cattle, livestock, and other animals constantly go missing. Pardy rounds up a posy to try and get Grant down before he kills someone. They stumble upon this woman filled with the creature's offspring and also witness her being torn asunder and letting loose thousands of squirming offspring. They enter through a subject's mouth and take over their body in a zombie like manner. The impressive thing about the offspring is that they share the same memories and present experience as the host and each former individual. Basically it's a network of intelligent zombies. Not only do the little ones enter people, but they also enter animals such as deer. There is a hilarious exchange between Pardy and a deer that is just one of the many hilarious bits this movie has to offer.

Now Pardy, Starla, and a young girl who was almost over taken by one of the little creatures are the only ones left to try and stop Grant before he can birth new offspring and take over the entire planet!

Even though this movie wasn't received well by the box office or some critics, I believe it to be one of the best horror/comedies of all time; it is even on par with "Shawn Of The Dead". The writing is great. Not only can you take out the comedy and watch this as a really fun horror movie, but you have some really funny parts. Nathan Fillion plays a type of character he did in "Firefly" that was really great to see him play after coming right out of "Serenity". The comedy alone is well worth the viewing. It does work as a funny B movie in the way that most B movies are funny, but it has some really hilarious lines and scenes that make you appreciate it as a top notch horror comedy. If you took one part "The Blob", one part "Dawn Of The Dead", and one part "Firefly", you would get a pretty good picture of what this movie is like and the greatness that comes from it. I really need to see Fillion in more of these types of roles and more of these types of movies need to be bad. This is a movie well worth a scream and a laugh!
Posted by Film Geeks at 12:48 AM