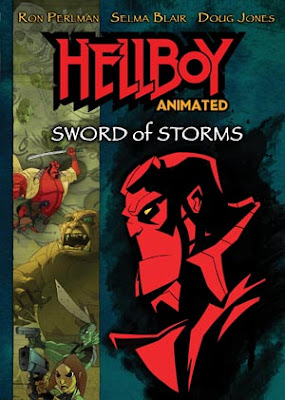 I was kind of disappointed with the live action version of "Hellboy". I didn't think the movie did enough to flush out the reasons why the characters fought for what they did and the story was a bit lacking. However, the cast was perfect. Ron Perlman as Hellboy was the only choice for the role. He has the talent and the personality to pull of the perfect Hellboy, which he did. Selma Blair also is perfect as Liz Sherman and Doug Jones plays Abe Sapien like no one else could or should. So while I didn't like the plot of the movie so much, I loved the roles. Ya, I know, I'm a bit messed up. So when I see that the magnificent three reprise their roles in a few Hellboy animated movies, I didn't dread checking them out.

In "Hellboy Animated - Sword Of Storms" we once again join the ranks of the BPRD (The Bureau for Paranormal Research and Defense) which Hellboy, Liz, and Abe are members of. This time they must fight the mess created by a Japanese professor who is studying a folklore myth of ancient Japan. The myth turns out not to be a myth at all when the demonic minions of two mega-demons, Thunder and Lightning, are released. The minions mission, like in all these movies, is to release their masters so that they may reign on Earth. Hellboy is transported to another dimension where he must protect a sword, that if broken, will release the demons on Earth. Abe and Liz must stop a dragon from waking and helping Thunder and Lightning wipe mankind from the face of the Earth. Two other BPRD agents, Kate Corrigan (Peri Gilpin) and Russell Thorne, must track down the professor who is possessed and stop him from releasing any more demonic minions to get Hellboy to break the sword.

I actually liked this movie more than the live action movie. This probably stems from the fact that with animation, it is easier to bring out the comic feel to the story than a live action version. The animation in this is very solid and amazing. Some of the scenes, however, have very poor lighting and take away from a lot of its beauty. Hellboy tends to look more boxy in scenes, but that is probably more like the comic book design than the live action (whose Hellboy costume I loved). Overall though, Tad Stones and Phil Weinstein do some amazing animation work.

The story is decent enough. It makes some good use of Japanese culture and history and the story could have almost come right out of a real life Japanese tale. I do have to gripe that the "dragon" in this movie looked more like a tentacle with a venus flytrap for a head. The story is a little weak in places, more so in the different dimension that Hellboy gets sent to. This story, though, was better written than the movie. However, I wasn't looking for background stories or motivation in this one as much as I wanted in the live action movie.

What made this movie for me, though, was the perfectly written humor. Each character is unique in their style and carried out perfectly in this animated flick. Hellboy has a great lackadaisical sense of humor since little can hurt him. There's one scene where he steals Thunder's hammer and misses hitting Thunder with it. Thunder is looking back to his hammer to Hellboy to see if he should get his weapon or attack Hellboy. Hellboy then dryly replied, "Just go get it." It's a perfect match from the comics. The same applies to Selma Blair's portrayal of Liz. Her humor is dry and adds a lot of laugh out loud moments in the film. Abe's sarcastic and straight to the point humor makes for some good laughs as well.

The solid animation, the good use of actors and humor styles, and a decent storyline made this movie worth the watch.
Posted by Film Geeks at 2:05 PM

Just found your blog and will definitely be back.

I completely agree about Hellboy the live action movie. I'd read the books but was disappointed with the film, even though everything seemed to be in place for it to be done right.

I'm hoping that Hellboy II will be what Hellboy should have been. It has the budget and the studio now knows Del Toro can deliver on every front. I'll be there to find out: less than two weeks and counting...