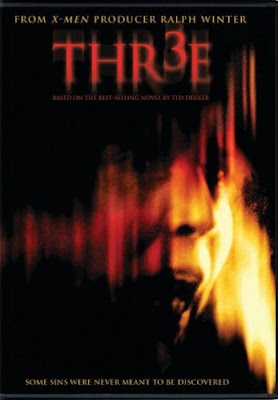 Thrillers can be a great movie genre. If done correctly you can have a great blend of action and drama. You can also have a story that you feel apart of. You're usually trying to figure out all the pieces of the story as the main character(s) are. However, if done incorrectly you can have a movie that's worse than watching Steven Seagal read "Hamlet".

The only real name of note in this movie is Marc Blucas. You might remember him if you were a fan of "Buffy The Vampire Slayer". Blucas played Buffy's second serious, and most annoying, boyfriend, Riley Finn. I was so glad to see him go; he was no Angel.

Kevin Parson (Blucas) is being stalked by a mad bomber who loves leaving riddles for his victims. The killer has very intimate knowledge of Parson's past and present. The police are three steps behind this killer and seem to just react to his antics without making any real progress. Parson must save not only himself and innocent people around him, but he also must save his childhood companion, Samantha (Laura Jordan). With the help of police detective, Jennifer Peters (Justine Waddell), these three must stop the killer before everyone dies.

This movie moves really quick right off the bat. You are thrown into the main story with little background into any of the main characters. This is really the movie's only redeeming quality. There is no coherent story arch in this film. It seems that random plot elements just happen randomly with nothing more in common with the previous scenes other than the main characters. I just can't describe how random this storyline is. I have never read the book, but if it was written as atrociously as this movie was then I don't understand who gave the backing for the movie. I only learned afterwards that this was based on a Christian themed book; the movie shows no real Christian message that you see in Christian based movies.

You feel nothing for Parson because you're just thrown into his life and the villain attacks right away. The movie does a horrible job at revealing his past throughout the movie. It's as random and sudden as the movie itself is. You don't love him or feel for him in any way. Why should I care if this guy gets killed? I really didn't know.

I hate thriller movies that use riddles that only the characters in the movie can figure out. When a movie gives you riddles, you should be able to figure them out because it helps you get involved with the movie more. You shouldn't have to know the fictional cities bus route in order to figure out the clues. Riddles like that turn people off to the movie because then they don't even try to think of the answers. In a good thriller movie you feel as if you can help the main character figure out the who, what, where, why, when, and how. This movie is nothing like that. It made me feel less than indifferent to the story. It's so convoluted and random, not to mention having way too many explosions in it for a thriller, that you couldn't even try to be drawn in.

The ending was just so atrocious. Its reveal is tired and dull and has been reused again and again. Let me just say that this might be a spoiler if you're going to watch this movie. This movie is what "Revolver" is like without the big budget. This movie also teaches you that if you are mentally ill, all you have to do is have someone convince you that you're sick and you'll calm right down if you acknowledge it. Watching the end of this movie was worse than volunteering to carry out an experiment to see what it feels like to get hit in the nose with a sledgehammer.
Posted by Film Geeks at 7:13 PM

Your writing is atrocious. Did you graduate from high school? Holy crap!

Wow your critique of my review is so well thought out and insightful. I have learned from the error of my ways. Thank you for listing specific gripes you had. Next time I'll write in the King's old English, like you suggested and I will take into consideration making every other word CaPiTaL. You must have went to some technical college to be so smart. Thank you for looking upon the lowly dog that I am. Thanks for reading the review!