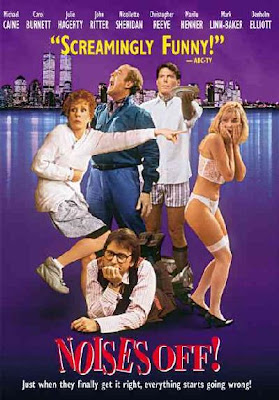 Once in a great while, Hollywood comes up with a script so well written and so fluid that it makes me want to cry. Sometimes, they even pick a spectacular cast to pull off the beautifully written script. Sometimes, Hollywood just stands back and let the wonder of movie magic happen. Sometimes, Hollywood has to steal plays from Broadway to accomplish this daunting task.

This movie has talent sweating from its pores. You have the great Michael Caine as the lead and the wonderful acting style of John Ritter to boot. There's also Carol Burnett and Christopher Reeve, Denholm Elliott and Julie Hagerty, Marilu Henner and Nicollette Sheridan, and a few others. Each actor is almost perfectly cast in the appropriate part.

The story might remind you a little bit about "The Producers". The movie is about a group of actors who are making a play. The movie is broken up into three very distinct acts. The best thing is that you are really only seeing the same play three different times, however with different perspectives. Lloyd Fellowes (Caine) is directing his next big play. However, his cast is full of drama and characters who almost seem bent on driving him nuts. The three acts we see are the final rehersal (how the play is suppose to be but with comedic breaks for the actors to have input or things to go wrong), then we see what happens backstage (we also get to see what happens when there is strife between the cast members), and then we get to see what happens when the play makes it big in New York...and things don't do exactly as planned.

To describe too much of this movie would absolutely ruin it. If you like comedy that is based on dialog as well with just a hint of physical comedy this movie is for you. All the actors in this are great but what really shines is the script. I swear, the person who thought of this was high or tripping on acid or both. It had to be amazingly complicated to write this but an absolute joy to see it turn out. The best part about the movie is that even though you are seeing the same play pretty much three times, each time is absolutely hilarious. I would also suggest multiple viewings of this film because each time you watch it you catch something you missed the first time. The movie is fast paced and you can find yourself laughing at three comedic elements at the same time during certain parts. This is one of the smartest comedies I have had the pleasure to see. Just don't forget the sardines.
Posted by Film Geeks at 5:27 PM