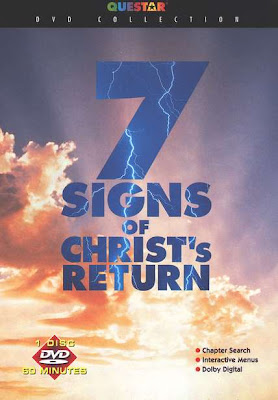 With many Christian documentaries out there most tend to be a miss rather than hits. I'm talking not only about providing correct material but also presenting it in an entertaining manner so that you aren't bored to tears. Many documentaries are really great in the way of info, but tend to have a guy sitting behind a desk and reading from his Bible. While that can be the proper format at times (usually with difficult subjects), not all call for that format.

Edmund Purdom narrates and briefly stars in this documentary about...well the title says it all, the seven signs that will mark Jesus Christ's Second Coming. To be clear, this will be the Coming that will have Christ ruling the entire Earth and not the pre-tribulation Rapture Second Coming. This is about what will happen before the Final Coming.

The seven signs listed in the movie are the following:

1) A return of to the Holy Land (Israel) by the Jewish people (which started in May of 1948).
2) The reunification of Western Europe into one superpower.
3) Coming of the Antichrist.
4) A one world religion
5) The building of the Third Temple in Jerusalem.
6) The invasion of Israel by Gog and Magog and God stopping the invasion
7) The battle of Armageddon.

Overall this isn't a bad little movie. At just under an hour, it doesn't feel like it drags as some other Christian documentaries do. Purdom does a good job of narrating, however I didn't really see a need for the movie to show him. The biggest pit this movie falls into is also its greatest strength. With each sign the movie provides background detail that leads up to the point when the prophecy was made and even shows some historical events that show these signs happening on a smaller scale. The downfall with this is that the movie, at times, spends too much time going off on a tangent. When covering signs 3 and 4, the movie stays too long on the history of Hitler and it tries to draw connections that don't really matter. Another good thing this movie has is showing movie clips to help illustrate what has, is, and will happen. The movie has a really good balance between dialog and visuals and there aren't too many cheesy dramatizations. There are two other big pitfalls in this movie that I have to take issue with. The first is that there is no mention of the Rapture being one of the signs. Whether you believe in Pretribulation, midtribulation, or posttribulation, the Rapture will come before Christ's Return. I doubt the maker of the movie, Rolf Forsberg, doesn't believe in the Rapture. So why no mention of it? The other really big draw back to the movie is that very few Biblical passages are giving. More time is spent on drawing parallels or describing what the future might look like. I would have liked to see more Biblical passages used. Overall though, it was a nice and simple movie that describes seven of the big signs of Christ's Return. The only question remains is, "Are you ready?"
Posted by Film Geeks at 5:47 PM

You scoff at all the movies you do based on supposed bad plots. You berate movies for your own inability to place yourself in other peoples shoes. After all that you rate this movie which centers the coming of a lil red guy with horns to retake this spec of a planet while an all powerful being takes the rest somewhere else with gold streets like its some rap video.

How can you be so hard to impress then take this crap at face value, Is the lord of the rings real to you also? btw Im ready.

Ha ha...thanks for the hilarious comment. I've never seen someone so ticked off at something they don't believe in and at a person they only know from reading their movie reviews. Truly hilarious, thank you.