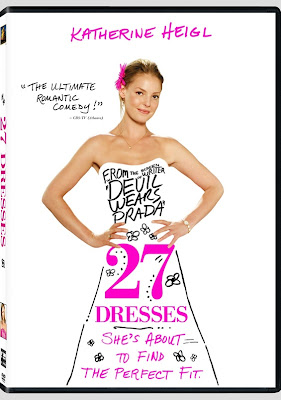 There is nothing wrong with a guy watching a good chick flick. Guys can learn a lot about women from movies like these. You can learn that girls are more interested in dialog rather than the visuals. You can learn that every girl wants their own version of their perfect date/man/day. You can also learn that sometimes, even women have a hard time entertaining each other.

The story is written by the same woman who wrote "The Devil Wears Prada", Aline Brosh McKenna. I enjoyed that movie; I didn't love it, but it didn't make me to want to get into a bar fight to reclaim my testosterone. Anne Fletcher is the director with her only other previous directing credit being another boy from the streets/girl from the class dance movie, "Step Up". This was also the return of Katherine Heigl to the big screen after her great hit, "Knocked Up". I think that's where I went wrong. I saw an excellent example of great writing and directing with one actress and applied it to a movie she does next that has kind of the same story elements of finding love and such.

The story is that of Jane Nichols (Hiegl) who has been a bridesmaid 27 times. She is drawn to the other women to help them achieve their perfect day. However, she hasn't found that special someone that makes her heart pitter patter. She's infatuated with her boss, George (Edward Burns), but he has never made a move for her. She has been stuck in this rut for a long time. That soon changes when her sister, Tess (Malin Akerman), shows up and her and George become romantically involved. So much so, that quickly, George proposes to Tess and now the fairy tale wedding that Jane had planned all her life has become her little sister's. To complicate things, a newspaper reporter, Kevin Doyle (James Marsden), is doing an story on her and her 27 times a bridesmaid and never a bride life.

This movie is not very good at all. The pacing of this movie is so slow; it just kind of meanders along, like trying to start a lawn mower after the long winter months. It also didn't help that this movie was so much longer than it needed to be. There is no way it needed to be close to two hours. We don't even get the movie title until 55 and a half minutes into the film. The real problem of this movie is that it wants to be a romantic comedy but it really turns out just to be a poorly written typical romance story with very little story. There are only one and a half good scenes in this film. The trying on of the dresses scene was the only funny scene and the bar singing scene started out really cute but it got really stupid quick. The storyline is your typical girl doesn’t need guy, girl meets guy but hates him, girl and guy then fall for each other, guy screws it up, guy apologizes, guy and girl live yadda yadda. It's a cookie cutter movie with no surprises, little to no laughs, and no originality. I felt like I was watching a remake of "The Wedding Planner" and "The Wedding Singer". Also, Heigl only has one really good line.

I do have to say that this movie accomplishes a movie first in the history of movies. This is the only movie where James Marsden doesn't cry, pout, or whine like a pansy, although you don't really learn a lot about it. I can compare to how much you get to know the character to a pebble skipping across the pond. He seems just kind of thrown into the story at times but disappears for the most part. The mean article he writes is also never really told to us. The movie tries to make him a kinda bad guy who's uncaring about marriage and only wants to advance his career but the movie really doesn't show us that at all.

I did learn three things from this movie. I learned that all you have to do to find "the one" is have your kiss with them have sparks. So ladies, I am single and looking for "the spark. Random geek kisses for all! Second, I learned that you can commandeer the microphone at any wedding and pretty much ruin it with your petty squabble. If this took place at my wedding, I'd get some grandma bouncers to pinch their cheeks right out of my shindig! Finally, I learned that all that matters is the wedding day and nothing else. What is Hollywood’s deal with making the wedding day the only thing that matters yet married life is always looked at as a hindrance? I'd like to think that Heigl's character got over her wedding day and in the 6 months after the one day she looked forward to with anticipation for her whole life, she got sick of being married and forgot she needed to keep building a meaningful relationship after the honeymoon period. That's how movies would really end if they were in the real world or continued a bit further than their ending do.