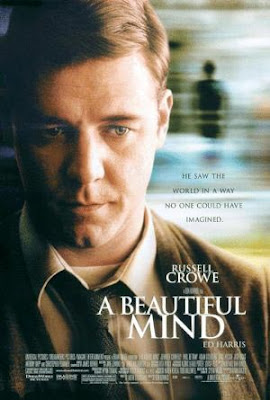 This movie involves two people who are involved in movies that are in either hits or misses. One is the director, Ron Howard, and the other is the main actor, Russell Crowe.

When I first saw this movie, I actually saw it first when it came out in 2001, I had no clue who John Nash was. So going into the movie I didn't really know too much about the story other than it looked like a good science movie. This is another movie proof that Hollywood can get more people to see a movie by tweaking the trailers to make it look like a different movie than it really is.

The cast looks good and I really don't know how Ron Howard gets a lot of these people on board his film. I still find it shocking that the kid from "Happy Days" and who stared in "Village Of The Giants" (ha ha check that movie out!) became this big director. Besides Russell Crowe we have Jennifer Connelly (Dark City) who plays the love interest, Ed Harris (Apollo 13) who plays a maybe government agent, and an always swave/creepy/British Paul Bettany (A Knights Tale).

So the story of the movie is that it's based on a true story. A guy named John Nash is concerned only about making a name for himself in the field of mathematics. For some reason he finds to do this, he must enroll in a college then never go to class. Also he must write his theory out on the panes of his glass window. Because of his work, that will eventually get him the Nobel Prize, the government wants him to help decipher Russia code. Let me tell you that this might be a spoiler if you think this movie is how the trailer portrays it.

John Nash is really a schizophrenic and some of the people he "knows" are just products of his illness. It is interest however to see how the line between genius and insanity, as Einstein once said, straddles that thin line. So the movie is one part genius, one part delusion, and one part coping.

After watching the movie and learning that it was based on a real life person I learned that they tweaked a lot in the movie. The real John Nash, who, at the time of this writing, is still teaching from time to time, heard voices instead of actually seeing the people he does in the movie. The movie also doesn't show a lot of his other contributions to the game theory. However, what they do show is splendid if you're as interested in that stuff as I am.

I still can't really see Russell Crowe as an intellectual. He also appears to have the same tired, gravely voice that he does in every movie he does and you only see the schizophrenic madness portrayed a few times. If Crowe isn't fighting someone or killing someone you rarely see any emotion in his face. The person who takes this movie just about is Bettany and Harris is just a bit too "typical spy persona" for it to work. Jennifer Connelly is always splendid to look at but we get to see her emote more than we do Crowe! The movie is fairly decent if you look at it with a sideway glance that this is based on an actual person. Where the movie falters is in trying to make you keep on guessing who the real people in the movie are. It would also have been better if they would have showed a bit more of Nash's game theories and what it did to various enterprises.
Posted by Film Geeks at 10:43 AM

Your blog is very informative. It really helped me learn many new things. Thanks for sharing it with us.
TestKing