This one's going to be quick and to the point. 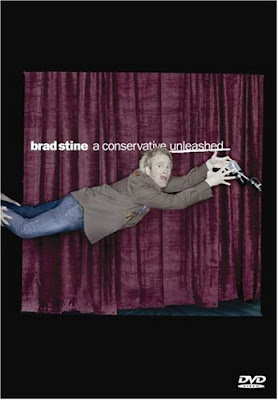 First of all since this will probably be viewed as liberal or conservative if you will like this; I am going to start out saying that I am a conservative. Now...this movie wasn't about stand up comedy but about Brad Stine talking softly and then screaming. Its kind of like Lewis Black except its not that funny. He makes me laugh as often as I would in normal conversation with a regular person. This shouldn't be classified as a comedy or stand-up but a political rant.

I'm sorry, but this wasn't funny and I think Stine should have taken a hint from the crowd when they didn't laugh at a lot of his stuff. Also, they applauded more than they laughed. If you want some conservative comedy thats actually funny rent something about Thor Ramsey or Jeff Allen.

In the end, don't try to tape your political rants and try to pass it off as stand up.

Nice blog indeed. I will always go back for your nice updates, Thank You for posting great articles with useful and up to date topics. I really appreciate your efforts in doing so! I hope to read more interesting topics from your blog!

I am a big fan of Brad and I find him very funny. Haven't you ever seen his 'Wussification' show? Hilarious. So, what if he throws politics and things that he believes in? A lot of comics do it but with a large amount of swearing. IMO, a comic that needs to swear so much is just trying to add empty filler and more time on stage. It doesn't add to the show. Any comic that can be funny without being filthy is genius.