Margot At The Wedding - Patrick

Most reviewers might start with the best movie they've ever seen or something significant to them. I choose to review a movie I saw last night. Ya...I'm classy like that.

Margot At The Wedding 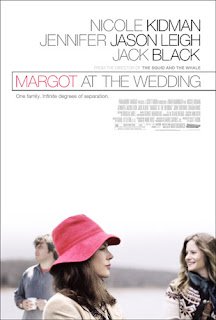 That's the description of the movie via Netflix. Now let me break this down from you. Nicole Kidman, who always seems like she's out of it in her movies and doesn't really want to be there, has a son who's kinda not normal and she's not really that normal herself. Her sister, who's not really normal, is getting married to a not really normal guy and has a daughter who's not that normal. The two sisters talk about random things and have no transition in their conversation. They'll be talking about their childhood home and Leigh's character will just randomly mention she's pregnant. Kidman's character will talk to her son about being good then will turn right around and tell him her sister called him a moron, even though she really didn't. Margot will tell him not to have sex with the babysitter but if he does to use a condom. However, the son tells Margot, out of nowhere, that he masturbated in the bathroom and she'll get freaked out by that.

There are a few funny parts with most of them coming from Jack Black just being crazy. However, once the credits start to role you suddenly come to the realization that Noah Baumbach just scammed you and he's running off down the street with your wallet. None of the characters are appealing, you won't be able to identify with anyone and therefore won't be on any character's side. This movie makes the main character a person you will hate through the movie, and as a movie watcher, I think that's something you're not suppose to do. The editing in this movie is horrible as well. I'm sure Baumbach would try to pass it off as something that's suppose to happen but I don't buy it. Two characters would be talking to each other and right in the middle of the conversation, and one character's sentence, the scene changes to the family taking a stroll in the woods.

The background of the story, is not expressed, even though the main storyline is talking about it. I don't know, that's just a guess because I felt I was walking into a dinner conversation after being kept out of the room for half an hour. So I'm sitting at the table and everyone in the room knows they kept me out for 30 minutes, and I know they've kept me out of the room for 30 minutes, and only they know the reason why. So when I try to engage in the conversation they just look at me with disdain for not knowing what they're talking about. For example, Margot may or may not being getting a divorce and she may or may not be cheating on someone. Why is that important? Beats me! Baumbach might have been nominated for an Oscar in his time, but I think that shows more proof of how the Academy is out of sync with all reality. He should have really put the pot down and tried thinking of a coherent plot line. Also Nicole Kidman isn't hot Baumbach, so I don't need to see a completely unneeded scene of her pleasuring herself! Oh and what was up with that hick guy bitting the son? No reason for it and nothing happens after that!

Baumbach if I ever meet you in a restaurant I will set your hair on fire and then douse you clam chowder. When you ask me what was that for, I will say the following "I set your hair on fire, puppy stalactite bumblebee phalanx gumdrop." When you look at me with unkowning stupidity I will then say, "See! It doesn't make sense in real life why should you use it in movies!" Then I will take a food tray cover, place it over your head, grab a wooden spoon, and bang the food try cover like they do in cartoon. Then I will do my best Daffy Duck acting crazy impression and walk calmly away. I will then kill myself when I watch your next movie and see that exact scene play out. Probably with someone like (oh goodness my eyes!) Reese Witherspoon playing the part of you and Nicolas Cage playing my part.

Ya know how they say that if you put enough monkeys in the same room with a typewriter they'd eventually write Shakespeare? Maybe Noah Baumbach should hire those monkeys and put down the pot. This movie makes no sense, is edited horribly, and the dialog is atrocious. If I could pay $50 to smack Noah Baumbach with a keyboard it'd be money well spent. If you can find a real story out of this film YOU need to put down the weed. I hate movies they try to be edgy but are really about nothing. I think movies like this are a joke made by filmmakers and try to sell it as an "avant guard" film and people who say "Oh that was brilliant" the filmmakers just laugh and laugh. Hey Noah Baumbach...I hope you gag on your bong and write a story that's worth taking 92 minutes of my life without making me feel like taking my own life.

Now I must go play a game of Sudoku...ya know...something with structure!