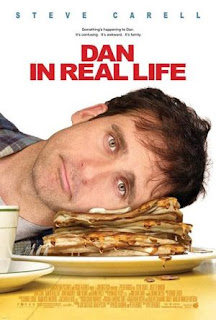 Wow, Steve Carell in his first movie of "please, take me seriously, sometime". Did it work? Let's find out. Steve plays Dan who's a widower with three girls and he goes to visit his family for a few days. He meets a woman randomly, only to find out serendipitously that she's really his brother's girlfriend. Ooo the plot...well it doesn't really thicken seeing as this is the plot, but...ooo we have a protagonist with an obstacle to overcome before the movie is over!

Make no mistake about it, while Carell isn't doing a role like he does in "The Office" or "The 40 Year Old Virgin" he's still able to pull out of few laughs. Everyone in this movie has some great comedy. So to bring those people into our foray I must give you their names. Dane Cook plays Dan's brother and if you've seen Cook in other roles you see him try to shirk off his role as the hyperactive comedian (he was also in Mr. Brooks in a definite serious role). He really does a decent job here of controlling the sugar in his blood stream and act like a real actor. He's a big surprise here. There is also Dianne Wiest who I know from a few seasons of "Law & Order", she plays Dan's very charismatic and charming mother. She's the type of mom you wish you had in real life because she can lay down the law when she needs to but she always, ALWAYS, says the right thing for any situation. The dad is also the same way, played by John Mahoney (Frasier's dad fame). It's a bit too bad that the family is kinda in the background in this movie because they are really lovable. This movie thrives on having you love all the characters and these two leaders of the household really help you with that. I think the best characters in this film are the three daughter's of Dan. They are played by Brittany Robertson, Alison Pill, and Marlene Lawston. These girls play the quintessential "daughters who grow up close because they have only a father to raise them". They're annoying and lovable all at the same time.

Juliette Binoche is the love interest in the film. She's not super hot or anything that I could really point to. However, I believe that to be purposeful and it's nice to see Hollywood shut up and let a movie role be filled in by a normal person. I could see them forcing Jennifer Aniston in the role. Why people think she's hot, I still have no clue. I personally believe that once you date Vince Vaughn you're hotness level goes to about a 3. But getting back to Binoche, she hasn't been in too much that I've seen. Although looking at her IMDB credits I see she was in an adaptation of Wuthering Heights, and if you listen to Episode 5 of Film Geeks you'll know my feelings on that demonic story. Out of all the characters in the film, I don't think her personality shined through enough. When Dan first meets her character, Marie, the film does a time lapse spacing of the two of them getting to know each other; it's mostly Dan talking about himself. That's fine and all but we as the audience feel for Dan and we kinda want to know why Dan likes her so much. We never really find out why though. We learn more about the feeling's of Dane Cook's character than we do about Marie, that's not a good thing. Marie fits well with the quirky family and she seems to fit in quite well, even after the family is grilling her with weird questions like "What's your perfect day" and others. She has quirky answers for them so we know she fits in well.

Dan seems more of an outside the pack character in this film without being too much on the outside. The film has him choosing between his love for this woman, his love for his family, and his love for his daughters. The movie shows Dan juggling these things believing them to be separate and therefore can't be sacrificed. The picture on the cover does not actually occur in the movie but gives a great sum up of the mood of the film. There are a few places where you can get choked up but it's not a big tear jerker. The comedy is straightforward and while the family portrayed in the movie could not exist in real life, you feel like it does exist, even if it's only in this one spot.

I'm glad I waited to rent this one. It's a good renting film; I couldn't imagine myself buying this to add to my collection or really even watching again by my own free will. If someone I know didn't see it and wanted to, I wouldn't pout about having to watch it again. I think there could have been some better editing. There are some crucial scenes that get cut out for artistic reasons that I wanted to know how they turn out. For example, Dan is an advice columnist and he might get picked up by other papers. The people who want to make this happen sit down for him for a little interview. Dan kinda blows it a bit by telling the truth of what has happened with him trying to steal his brother's girlfriend and then scene ends. However, at the end of the movie you find out he got the job and it's kind of an "ummm...ok...I guess" moment for the audience. I don't feel I got a good enough reason why Dan fell in love with Marie, especially when their first meeting was him doing all the talking. Even if that wasn't him in love right away, there isn't a lot the movie shows you how she is endearing. I would classify this movie as a light comedy with some romance because you'll find yourself smiling at the antics of the family more than you will straight out laughing. Also the story is more about Dan "finding himself" and be "able to love again" rather than it being an romantic comedy. It's a cute movie and it earned it's grade.