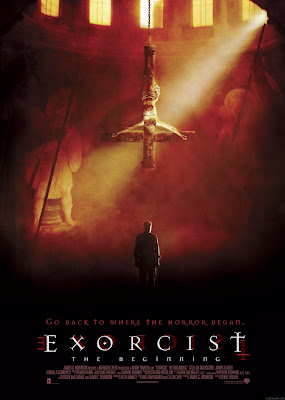 When I heard that my favorite scary movie of all time was going to get a beginning story I was excited. The Exorcist scares me to this day. Whenever I watch it, in the dark of course, my heart palpitates faster, my hands get clammy, and I swear I can see my breath. To see the back story to Father Lankester Merrin was exciting.

Then I remembered that there were two sequels made to based-on-a-true-story movie and I remembered how "well" those turned out. So after the excitement died down I started to get scared, and it wasn't a demonic source.

I still had some faith in the movie. The story looked good, the actors were decent, and the director (Renny Harlin) had directed a few other movies I like (Die Hard 2, Deep Blue Sea). So with faith teetering back and forth between hope and hopelessness I started the movie.

The story looked good. It's 1949 and Father Lankester Merrin is no longer a Father or a believer. He's called upon by a collector to investigate a church in eastern Africa that was built and quickly buried. The collector wants Merrin (played by Stellan Skarsgård) to find an artifact he believes was buried in the church. Merrin is an Oxford trained archaeologist so he's interested enough to go and investigate. He's helped by Sarah (Izabella Scorupco) and Father Francis (James D'Arcy). His investigation of the buried church uncovers a really neat story arc if used properly. The spot where the church is built was the exact spot that Satan landed when he was cast from Heaven. I have to admit when Merrin finds this out my skin did shutter a bit and the buried church looks spectacularly creepy.

I want to say here that I don't want to give too much away but that would hint to you that I liked this movie and it's worth keeping some things hidden in order to only wet your appetite. I cannot say that, at least for that reason. I can say that I don't want to say much because jack crap happens! This movie tries ever so hard to freak you out but most of the time it's jump scares (like what happens when a body falls out of a closet) and the story was written to try and keep you guessing. Unfortunately the writers forget to add something interesting to the plot. I will admit that it was neat to have a back story as to how Merrin lost his faith. I won't give it away just in case someone wants to watch this snorefest. Let's just say, Nazis weren't only harassing Indiana Jones.

So besides nothing happening there is one part of the movie that is just a slap in the face to fans of the original. First of all throughout this whole crapfest we're suppose to keep guessing on who is indwelt with a demonic entity who's trying to thwart attempts to find out what's going on. They don't do a good job at it and who it is is pretty predictable if you know how these types of movies work. When you find out who it is you're treated to a complete and quickly drastic change from the person into a transformed looking character that Linda Blair's character looked like in the original. It's hokey, it's stupid, and it's insulting. The reason Regan (Blair) looked like she did in the end of the movie was because of the progression of the possession and what everything was doing to her. In all honesty the character in this movie takes about 6 seconds to transform into that (and that person looks EXACTLY like Regan in the later parts of the original) when Merrin figures it all out. What ads insult to injury is that there is a chase scene between the demon-indwelt person and Father Merrin. It's sad and would be comical if I didn't feel like gnawing out my own eyes. I would rather perform an exorcism than watch this movie.

I don't know about some critics ability to think is but this movie was the suckiest sucked that ever sucked. There was almost no scare ability in the movie and those that were were so predictable you find yourself rolling your eyes. They try and recreate Linda Blair's character/demon the same way and they rely on digital effects which reminds you that this is some cheesy directoratorial attempt to make good on one of the greatest horror movies of all time.

The only cool part of the movie is the ending where Father Merrin is told about a case of possession in America and you see him walking away...bag in hand and the great music trailing behind him. Kinda reminds you of the end of "Red Dragon".
Posted by Film Geeks at 7:45 PM

Nice review. I would, however, recommend you check out the studio's other prequel, DOMINION: PREQUEL TO THE EXORCIST, the film by Paul Schrader which EXORCIST: THE BEGINNING reimaginined, poorly (ie. with high octane action and "scares"). It, too, features Stellan Skarsgard as Merrin.

No one should just see one prequel and not the other. Both have pros, both have cons, and are in fact good, bad and ugly, and only hint at what could have been without the heavy-handed studio interference.

I'm writing the definitive book on all 360 degrees of the two films and their production history. It will be a year or more before It's available, but fortunately a fair amount of key players have granted me interviews, and a few more are waiting in the wings, as I deal with my more practical priorties. But stay tuned to my website, which I update as often as possible.

Sorry, I thought it would have showed up when I hit publish

i SO agree with this review.. but also wonder why the kid Joseph acted all kooky when he wasn't even the possessed one. i was insulted by this movies' stupidity. junk!