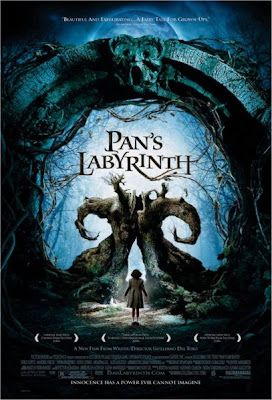 So I see the trailer, I see the cool looking monster-type people, and I hear the hype from the Oscars and the critics. They all sound and look pretty cool. Finally, a fantasy movie that doesn't need a prophecy of a farm boy in a middle age-like time and great evil is upon the land. I also hear Guillermo del Toro is a great Italian director.

That's all I really looked into the movie before I rented it and settled in for a nice modern fantasy movie. Ya know, I really should have learned my lesson from the American trailer of "28 Days Later". AMERICAN TRAILERS OF FOREIGN FILMS LIE!

So the story takes place in the fascist led Spain. Ofelia (Ivana Baquero) and her pregnant mother Mercedes (Maribel Verdu') go and live with Mercedes new husband, an evil army captain, Vidal (Sergi Lo'pez). Ofelia is obsessed with fairy tales and she meets a few mythic creatures who tell her she's a princess who must do three trails to prove who she is so she can go and rejoin her father in the heavens. Doug Jones (Silver Surfer) is the only name I know from this film as well; he plays two of the creatures.

That's the part of the movie I only really cared about. However, the other half of the movie is a group of rebel Spaniards trying to take out the army captain and how evil Vidal is. I'm really lost in this movie.

I do have to admit that the visuals are awesome. The fawn and especially the Pale Man are freaky as heck and look so real. But can someone tell me what kind of movie this is? I feel like I'm the rope in a tug-of-war. Is it a war movie or is it a fantasy movie? Is the girl delusional or is this stuff actually happening? Who is the main character; the girl or the captain? Why can't I just have a modern fantasy movie?

Because of the duality that this movie has, I can't really see a plot in it. There is no overall theme, there is no lesson learned, there are no heroes or heroines. The most I got out of this movie was never trust giant fawns you meet in the forest and never get knocked up by an evil Italian army captain.

Nah, I'm happy to disagree with the critics, but I loved Pan's Labyrinth. It was an adult fairy tale, one without dilution of impact. As I mentioned in my review of it, there are things here that you can't unsee.

The fact that you're asking questions about it is half the point. Watch Brazil and then ask yourself about the ending of this one again.

i dont care much about what critics think is a great movie, and i dont watch many foriegn films, but this movie blew me away. i guess as someone who has a vivid dream world and a not so happy real world i understood this movie totally. i knew nothing about it when i first watched it, so the impact was overwhelming. its truly one of the saddest movies about a child i have ever seen, but its a classic nontheless.

Having a critique of a movie or music or book, is just subjective. I don't trust anyone's opinion except my own, but I do like to hear what others think. The reviewers here (which may have taken a hiatus) seem to expect their movies to be very straight forward without any room for questions. A great film is art and it meant to be seen again and again. Art holds the artists vision and not the viewers. To understand it is important, especially for the viewer, but to pull something out of it for one's self is important also. Even though I don't agree with many of the reviews here, I appreciate the effort. No effort means no results. www.freddysopenmind.blogspot.com