So I figured I'd write about two movies today that most people like. So if you see a theme today, you win a kiss from Briney! 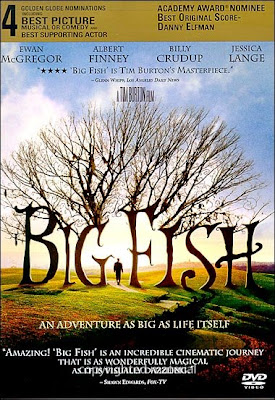 I always love when a movie touts that it was "nominated" for an award. It's like bragging that you took eighth in the 200 meter dash in the Olympics. When people ask out of how many, you say out of eight.

I actually saw this movie on the recommendation of Briney. He claimed it as being a great movie that was really fun. Since Briney tends to like more mainstream, good movies I figured it was worth seeing.

Tim Burton is the director of the flick. I tend to have a love/hate relationship with Mr. Burton. I like some of his stuff but his man-love for Johnny Depp and putting him in everything along with his reusing of movie ideas and his "eccentric" nuttiness get in the way a lot of times for me.

The movie stars a pretty good cast. Ewan McGregor (Star Wars...was much better in II and III) is the main character for the most part. Billy Crudup (Sleepers) is his sniveling son. The wonderful Albert Finney (Amazing Grace - see this movie) is the older version of the main character who I think is the most lovable character in the movie; especially the bathtub scene.

So the movie is basically about Edward Bloom, Crudup's character's father, who spins big tales of his life. Bloom is dying of cancer and his son, Will, is visiting him for his last time and trying to get the real story of his father's life out of his father. What we're subjected to is seeing parts of Edward's in flashbacks. So by listening to his father's stories, which involve some pretty out there experiences (hence the "Big Fish" title), he's trying to learn about who his father was, is, and his shortcomings.

That's what they tell me at least. What I sat through was random stories that were pieced together and involved some of the same characters. I think Burton tried to get us in the whimsical mood and feeling like grown up children (like Edwards is suppose to be). In respect to myself, I was incredibly board and found no greater moral to the story other than not to be a whiny son if my dad ever tells me outlandish tales. Oh and the ending, makes no sense!

*Yawn* Wha? Huh? Oh, it's over? What was the plot about again? This movie tried to be a movie that ties everything together like M. Night Shamalanadingdong's movies and fails miserably. Most of the movie are short stories that make no sense to the bigger picture. There were no shocks of amazement or gasps of realization. This movie is just boring and tries to be "bigger" than it really is. Also...the ending makes no sense!
Posted by Film Geeks at 12:27 PM

What? What's bored? What is the "it" you are referring to? Are you saying the movie is boring because that would be "it's boring". Would you like to clarify a bit more for the rest of the viewing audience?

Got to love spelling Nazis who don't use capital letters. He's correcting your spelling, that's all.

I loved Big Fish. It felt like mature Tim Burton in a way that something like Sweeney Todd didn't. Then again I've only seen it once. Definitely time to revisit.

Big Fish is definitely one of my favourite movies, and I didn't ever experience it as a simple "put-together" of different stories. It's about phantasy and its importance in a world in which everything is countable, is black or white.

And of course, the end does make sense. The son finally realizes that he can make death easier for his father - and also for himself to deal with it - by making up a story about it. There's nothing terrible about it then, a good way to go. What I also liked is the funeral scene in the very end of the film: You can see that Edward didn' lie - he just exaggerated where ever he could to make the stories of his life "bigger than life." And wasn't it fun to watch them?

This blog is highly informative, crisp and clear. Here everything has been described in a systematic manner so that reader could get maximum information and learn many things. This is one of the best blogs I have read.
Exam Questions