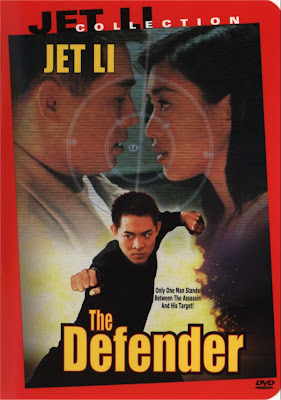 I'm a fan of movies where people do something I can't. For example, I can't...say...rip out someone's throat with my shirt off. Just one of the many fine reasons why I like "Road House"! I love being in awe of Kung Fu movies as well. I was fortunate enough to be introduced to this genre of movies with "Enter The Dragon"; arguably one of the best kung fu movies ever made by one of the best kung fu actors/artists ever, Bruce Lee. I should also clarify that when I say "kung fu" I'm using a general term to refer to all movies that deal with people kicking and hitting the crap out of each other.

For a while now I've been a very big fan of Jet Li. I think he is one of the best modern kung fu actors. There are many people who want to have a Jackie Chan Vs. Jet Li fight but that should only be reserved for Kirk Vs. Picard and Superman Vs. The Hulk debates. Each have their own style and each should be judged on their own merits. However, Jet Li has done a lot less comedy and a lot more hardcore roles.

Now with an introduction like that, you'd think I'd pick one of my favorite Jet Li movies, right? Ya, I just picked a movie I saw recently that happens to have Jet Li in it.

So the plot of the story is pretty simple and allows for a lot of Li kicking the crap out of the bad guys. There's a Chinese businessman who kills someone and a rival businessman's daughter witnesses the murder. Because of the girls father's close connection to the Chinese government, they send one of their best cops to protect the girl until trail. Ya, I know, I'm as surprised as you! I too, did not know that China actually held trails. I assumed that since there are over a billion people there that they'd revel in any excuse to take someone out. So the plot is simple and straight forward. That is until the writers decided to take that same ol' story of bodyguard/body-to-guard story line. You know the one. Both start out by hating each other until the danger of the situation makes them confront and rely on each other until the inevitable happens. So they both must struggle to survive and not let their feelings get in the way. I'm sorry, but if some mob elements were out to kill me and I must rely on some good looking chick to protect me, I'm not going to use my masculine wile to throw off her concentration. Of course, maybe attempting to use my masculine wiles would turn her off so much that her complete concentration would be on protecting me. Anyways...I digress.

Ok tell me if you heard this one: A no-nonsense protector is hired to guard some subject who is a mean person. When the bad guys go for that person, the protector does his job and fights them off. Slowly this changes the heart of the mean person and they fall in love right before they meet the boss. This movie is the kung fu version of Driving Miss Daisy. Jet Li needs to stick to good movies.
Posted by Film Geeks at 9:14 PM