A Boy And His Dog - Review

A Boy And His Dog 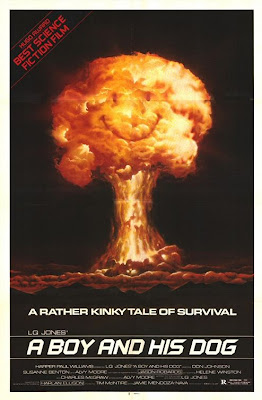 So when I pick it up with a smile I read the title and think that the movie is about a post-apocalyptic world where a boy tries to survive and help his dog survive as well. Ya know, a tale of boyhood love in a world of chaos.

Then I watched the movie.

Don Johnson plays Vic who somehow has a psychic link to his god, Blood (voiced by Tim McIntrie). He makes the dog sniff out food and water. However, most of the movie is having Blood sniff out a woman. When Vic finds a girl, she leads him to an underground city where the people there can't reproduce and who are really wacky. So they want Vic to impregnate a few women and then they want to kill him.

What a freakin weird movie! The movie never explains how the two characters get psychically linked or how Blood can talk. I mean not even Vic saying something like "Geez, I wonder how this happened and how I can hear you talk". This movie reminds me of what Lassie would be like if Timmy was in puberty and a nuke exploded in Maybery. This isn't a horrible movie but I can't really see a decent plot in the hunt for sex. This movie is listed as Sci-Fi but I'd file it next to Spiderman 3 under boring. This is still better than Spiderman 3 though.
Posted by Film Geeks at 11:41 AM

Labels: a boy and his dog, movie, review

The post is very informative. It is a pleasure reading it. I have also bookmarked you for checking out new posts.
Exam Questions