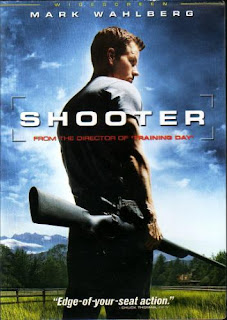 For those of you who know me you probably know these two things about me. First, I have a passion for conspiracy theories and second - I don't like Mark Wahlberg. So when I saw Shooter looked good I had two sides of the scale with one good and one bad thing on it. So I had to make a choice. What would be the deciding factor to put on either side of the scale. The choice was made and the outcome was to watch it. It had guns...sniper guns.

This movie is about Marky Mark's character gets set up for a shooting of a political figure that he didn't do. He's one man...against the system. Man can I create art for a tagline or what?! Danny Glover stars as his main adversary and there's something strange about Glover in this movie. Listening to him, it sounds like he had dentures that wouldn't stay stuck and it sounded like he was talking over them. I'm not saying that's what it was, but he definitely talked weird in this movie. Really though, that's just a random observation from me to you. If you watch this movie see if you can tell.

So Mark spends the entire movie trying to figure out the who and the why of the plot and he snipes people to get to the top. This movie has some of the best modern day sniping scenes I've seen. There is minimal CGI in this movie but what there is is beautiful. Now I have a love/hate relationship with CGI. I believe CGI to be a tool used to create better works of cinema art. I don't believe it's there to be an excuse to make a picture around it. After all, look at the stuff that comes on the Sci-Fi Channel. At least they have an excuse. You want to see cheesy sci-fi movies on that channel. You don't want to learn that someone paid $250 million to make a movie where no two actors are in the same room. DISCLAIMER: This will be one of a few different short rants in this review. Anyway the explosion CG in this movie is gorgeous.

Now, onto our main *struggles to say it* s-star. The reason why I don't like Mark Wahlberg is the same reason I don't like Nick Cage. Mark acts like himself in his movies, he's only playing people with different names. The thing that makes me more angry is that he is a bankable star. If you kept putting Keanu Reeves in different roles acting the same....ok bad example. Okay, how about if Tom Hanks acted like Forrest Gump in every role he ever did? You'd say to yourself, "Wow, really, Tom? Again?" I mean, even Adam Sandler has changed and moved away from his moron with funny voices and has actually stared in some remarkable roles. Now I don't hate Mark as much as I hate Nick Cade. That's just would be too much hate for me to carry around. So I judge Mark now based on individual roles. I absolutely loved him in Invincible and that's what brought my hate level down in dealing with him. It rose a bit when I found out he'd be staring as Max Payne in the movie. So how was he in this movie? He was pretty good actually. Now, he does try to act hardcore in at least three different times in the movie. He does not pull it off at all. However, he plays his character well and he's not trying to be overly action star-ish in the role. Of course that might have to do with more of the director than the actor, but he needs all the points he can get with him. I do have to give him credit though. He has two great lines in the movie. I believe in catchphrases. I would go to Bond movies if there were no action and it was all bad pun catchphrases. Marky Mark pulls them off swimmingly. He really does. I won't give away what they are because you need context for great catchphrases and I wouldn't be a proper film snob if I just said them all willy nilly. If he had one more I might have had to change my mind on him again. At least until I remembered that he did star in Fast and Furious. Grrrrr!

The storyline is take from a Stephen Hunter novel and while I haven't read the book the screen adaptation was great. You had some great action mixed with a believable and convincing storyline. The plot about how the conspiracy has no head and no political agenda of left vs. right is true. This movie is about inside jobs and I find it funny that in the early start of the movie you see Mark with the 9/11 Commission Report. Hmm inside jobs and whitewashing cover stories? I think we're reading the same things. Watch this movie and take its themes in your mind. Ask yourself, "Are these things possible?" If you aren't too blind you might be scared of the truth and just it out of your mind and go about buying your grande lattes, your Old Navy polo's, and go about researching your lineup for your fantasy football team like it was important. Note: See this and the "Why I don't like Mark Wahlberg" parts were the other rants I warned you about. I think movies like Shooter, The Seige, and elements of The Long Kiss Goodnight are just fictions stories written around actual or possible actual events. If the conspirators inside governmental bodies were smart they'd sue these script writers for copyright infringement.

Ya, I know. I'm just as surprised as you are. This movie has some really great action but not an abundance as to make it a true "action" film. It has a great storyline that kinda makes it hard to guess what will really happen in the end. It's got some really great sniping scenes for us fans of sniping movies. The big downfalls are Mark Wahlberg in it of course. Danny Glover isn't really that menacing of a bad guy. Lastly, the chick in the film is only there as something Hollywood deems men need to look at. Listen Hollywood, we can understand putting Mark Wahlberg in there for the ladies, but when you start out a movie with some great sniping scenes and break out a 50 caliber you don't need a chick with a horrible southern accent who hardly ever wears a bra in the movie. Give us more sniping scene, which you did, and leave her out of it. Also, you don't always need the stereotypical henchman in the film who is a jerk to his woman captor and who freaks out when the hero comes for her. Globalist elites, if you take notes from movies, hire some competent henchmen who aren't like this. I would suggest going even as far as making your henchmen unicks. You're running a business to control the world through fear and power control, you don't need shotty henchmen when you got the world on a string.

So folks, I suggest you watch this movie. Especially if you've just seen my other reviewed movie "Margot At The Wedding". Yeash! Watching those two movies back to back would make Shooter seem like the Godfather.