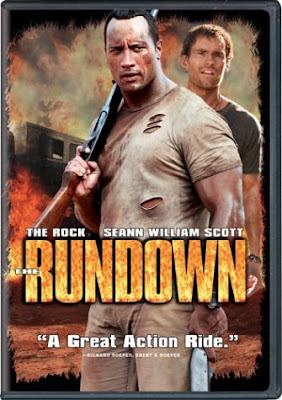 Ah the classic tale of two guys who hate each other at the beginning of the movie only to turn out the bestest of friends in the end.

The four main stars in this flick are The Rock (Scorpion King), Seann William Scott (American Pie), the always sexy; Rosario Dawson (Clerks 2), and the guy who picks the weirdest movies to be in; Christopher Walken (Communion - I'm one of 4 people ever to see that movie).

The plot, if it really matters when you throw The Rock into a movie, is that Beck (Mr. The Rock's character) is the big beefy guy who just wants to be a chef. In order to make money to open his own restaurant he does what any big beefy guy would do - track down people for the mob! His boss hires Beck to find his son, Travis, (Scott) who is treasure hunting in the Amazon.

When Beck gets to his destination he finds the town run by a nasty almost-slave driver, Hatcher (Walken). Beck just wants to get the guy he came for and leave, but Hatcher doesn't entirely believe his intentions. Beck meets up with Travis and before he's able to capture him and take him home they find themselves on the run from rebels who are fighting Hatcher as well as Hatcher's men. Travis has found a sacred treasure that the rebels could use to rally the people who "work" for Hatcher and overthrow him. Rosario Dawson gets thrown into the mix later and the best scenes of this movie are of her. I don't know how someone in the Amazon heat can look so good.

So that's enough of the plot, all we care about in this movie is the action produced by The Rock and the comedic relief produced by Scott. The comedy is not all that good. Scott does have a few funny scenes but nothing special. When Rock tries his hand at the comedy it's just awkward. You almost feel like you have to cover your face with your hand and peek out between fingers. There's a few scenes with evil monkeys that are just stupid. Also, someone like Rock wanting to be a chef, is the stereotypical "big beefy guy with a heart of gold" character. It would be like having Arnold Schwarzenegger wanting to stop his life as a commando and learning ballet (kinda like Hulk Hogan in "Mr. Nanny"!). It's been done before...and it will be done again.

The action in this movie is fairly well done. You have some good fight scenes with the Rock of course and you have some great action towards the end of the movie. Scott gets a few good fights in, but it was unbelievable to see him go up against the Rock in the beginning of their time together.

This is a typical buddy movie. Person A is straight and no-nonsenses with dreams of making it big. Person B is the opposite but with also dreams of making it big. They hate each other at first until they are put into situations where they must rely on each other. They then become friends and fight the bad guy. This movie is basically Dumb and Dumber meets The Odd Couple with fighting. The fighting is this movie's only saving grace. Walken as a bad guy is not very good. And the statue that's in the movie that everyone wants makes no sense to the story. Also this movie provides no background to any of the characters so I wasn't sure why any of this stuff was happening. But hey, The Rock was in it, although not with his trusty board from Walking Tall.
Posted by Film Geeks at 11:18 AM