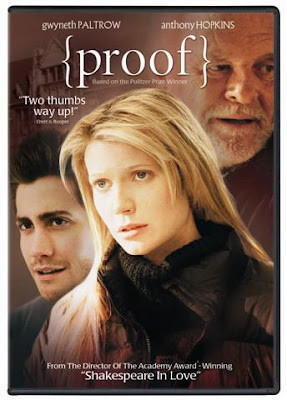 I am a really big fan of science type movies. It's really fun to see a talented writer take on something as charming as Einstein helping a young man win his daughter's heart ("I.Q.") or something as clever as "Pi" was - sheer brilliance.

So I watch a trailer that shows Anthony Hopkins portraying a professor who might have discovered a great scientific breakthrough. After his death, his daughter, Gwyneth Paltrow, with the help of Jake Gyllenhaal find out what it was. This is what the trailer told me. I think most of you regular readers of my movie reviews can tell where this is going. TRAILERS LIE!

So a once brilliant mathematician, played by Hopkins dies a few days before his daughter's, Catherine (Paltrow), birthday. She must cope with the realization of having to cope with the insanity that plagued her father's life in his final years. She must also deal with her sister, Claire (Hope Davis), who is town for her father's funeral. She must also, appease a mathematician, Hal (Gyllenhaal) who is looking for a math proof that her father might have discovered in a rare moment of lucidity. After sleeping with Hal, Catherine gives him her father's notebook with the proof. Hal reads the notebook and finds the development of a unique math theory. Catherine claims she developed it but neither Hal nor Claire believe her and they question whether or not her father's insanity got passed to her.

So ya, this was kind of a step away from what I saw in the trailer. The best (worst?) part of the second plot I wrote above, isn't the real plot. So let me give you my rating and then my analysis of what this movie is REALLY about.

This movie fails in everything. The title itself is misleading and so were the trailers. From what I was shown I was expecting something like Pi or A Beautiful Mind or something dealing with the science in the movie.

What happens when I watch this garbage? 99 minutes of Gwyneth Paltrow crying. You cannot find me one scene after the first 15 minutes where she isn't tearing up, sobbing, or balling...AND SHE DOESN'T STOP TILL THE END!!!

You think we learn anything about what her father was working on? Heck no! Do we just learn that her family is screwed up and you can get paid per tear in a movie? In fact we do. The theme of the plot shifts so many times. Do we want to know if she has her father's illness? Well, ok, now do we care how she will deal with being crazy? Well, ok, do we care what's in the notebook? Ok, well, do we care that Hal uses her to obtain the notebook and must choose between his work and his heart? Ok, well, do we care with who came up with this "brilliant idea" that we, the audience, are not even told about? There are literally four other transition plots that I'm not even going to tell you about because I believe I made my point.

How anyone found this good or even ok is beyond my comprehension. No one in this movie acts well and having Hopkins in the story for all of 5 minutes helps that problem even more. Gyllenhaal can't make up his mind whether to be interested in the work or the girl. By the way, did I mention Paltrow cries? She cries more often than she has lines! After watching her cry her way through the movie, I wanted to cry - cry for making my way through a movie of crying!
Posted by Film Geeks at 9:39 PM