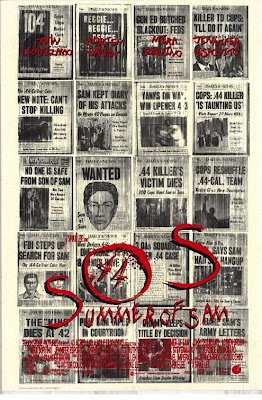 I'm a big fan of most of what Spike Lee has done. My favorite work of his is "The 25th Hour" and "Do The Right Thing" was brilliant. So I thought he would have a good twist of the Summer Of Sam serial killer days. You have a diverse and almost segregated New York City in 1977, you have the heat to make people crazy, and, oh ya, a serial killer is on the loose. This was good fodder for a Spike Lee Joint!

He also garnered some talented actors. John Leguizamo (Clown from Spawn), Adriend Brody (The Jacket), and Mira Sorvino (Mimic) to add to what I thought was going to be a serial killer movie with a twist of racial commentary.

Let me tell you, in brief, what the movie is suppose to be about then let me tell you what it's really about.

The year is 1977, one of the hottest summers for the little town New York City. A serial killer is at play and the whole city is on edge with people getting murdered left and right. A group of people in a predominately Italian-American South Bronx are freaking out; suspecting their own and fearing for their lives.

You want to know what this movie is really about?

It's about how many times we can see John Leguizamo have sex and cheat on his wife, how bisexual Adriend Brody's character is, and how stupid 1970's greased up, Italian-American can be while trying to break the record of saying the f-word in a film.

This movie shouldn't be called "Summer Of Sam" but it should be called something like "Hey let's make a movie that's 2.5 hours long and is about one guy's sex life and how many times we can use the f-word". I don't think that'd fit on the marquee. Seriously, this movie has hardly anything to do with SoS killer. It would be like watching Girl Interrupted to learn how the Vietnam War affected people. I like Spike Lee's movies...yet only when the titles actually go along with what the movie is about.
Posted by Film Geeks at 4:13 PM