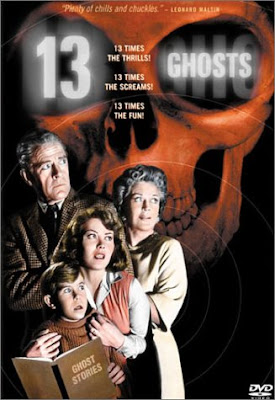 I feel really bad that most older sci-fi and horror movies are no considered B movies. At the time of their released most were on the cutting edge of film technology. The stories might not be considered the best by todays standards but for the time they were made, these plots were just as normal as any normal flick we watch today. The giant ants of "Them!" could be compared to any normal horror flick today, just with more story and less mutilated bodies. So looking at this movie should be looked at with not just eyes of today, but through the eyes of the golden age of cinema.

I know more people have probably seen the 2001 "remake" (and I use that term in the absolute loosest terms possible and I mean lose like a 96 year old prostitute who has been working everyday for 86 years.) However, that movie is blasphemous to this wonder and classic film.

This film was directed by William Castle who was a master director and movie magician of his time. He made some great horror movies in his day and he loved having gimmicks for his flick. His 1959 movie, "The Tingler", rigged up seats to vibrate and were used to scare people during the movie whenever the monster showed up. Likewise, this movie was filmed in "Illusion-O". The audience would put on special glasses when the characters in the movie did. This allowed only those wearing the glasses to see the ghosts. Wonderful, classic '60's movie nostalgia. The movie also stars Martin Milner who played Pete Malloy in the wonderful "Adam-12" series.

Buck Zorba (isn't that a cool and creepy last name?) is having trouble providing for his family. Their power has just been turned off and their furniture is reprocessed. However, lawyer Ben Rush (Milner) contacts Buck and informs his that Buck's reclusive uncle, Cyrus Zorba, has passed away and left his house to Buck. There's just one catch, through his world travels, Cyrus has captured 12 ghosts and invented some special glasses to see them. Ben also informs the family that Cyrus has hidden a great deal of his wealth in the house somewhere. Seeing as the movie is called "13 Ghosts" and not 12 ghosts, someone in the story will become the 13th. But who?

Although I was never able to see the movie with the Illusion-O glasses, I was very impressed with the visuals in this movie. I remember the first time when I saw this when I was young, the movie did scare me. The ghosts are both funny and scary. The housekeeper who looks like witch is one of the most entertaining characters just the way she plays the creepy personality. The kid in this movie is pretty entertaining too. This is a perfect example of why old horror movies are superior than today's flicks. This movie relied on showing ghosts, sure, but it also has a great story line. You get scared by some of the ghost and the sayonce scene. Then you have to guess who is going to be the 13th ghost, where the money is, and what's going on. If you're a fan of old horror movies, this is a must see.
Posted by Film Geeks at 1:08 PM