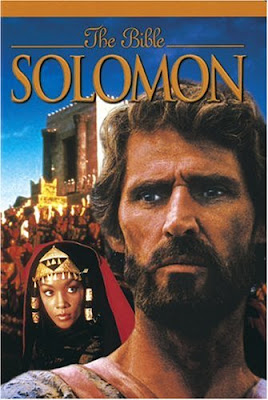 I am a big fan of the TNT "Bible Series" that were made in the late '90s. My absolute favorite is "Joseph" and it still brings a tear to my eye whenever I watch it. These movies have some high profile actors and the settings, the characters, and the stories are usually pretty good.

Roger Young is the director of this one. He also directed "Joseph" and "Moses" of the "Bible Series". He even directed his own Jesus movie. However that movie had the whitest Jesus I've ever seen, even more white than the blue eyed Jesus from "Jesus Of Nazareth".

Ben Cross plays Solomon, Max von Sydow plays King David, and Vivica A. Fox plays the Queen of Sheba. I do have to say that Fox is gorgeous in this movie and I always feel kinda weird that this is a Bible movie and I'm getting flustered. Good thing she has her face covered half the time she's on screen.

The movie covers most of the important events of Solomon. From his taking over the kingdom of Israel when David passes away, to his adultery with Bathsheba, to his building of the Temple, to his worshiping of false gods, to showing his God given wisdom.

I want Bible movies to be as close to the actual stories as possible. So I don't want to watch a Noah story where Noah goes crazy and his sons and their wives can't keep their hands off each other and there are some people who survive and want to pirate the Ark. Nor do I want to see a gay Jesus or anything along those lines. The one movie that is an exception to my rules is "The Last Temptation Of Christ", and those reasons will be in a review for that movie. So with any Biblical based movie I always look at three important aspects to determine if I like it.

1) The acting. I want to be able to believe that these actors are the characters they are trying to embody. An actor who portrays Jesus as really skinny and weak is not doing a good job. I also don't want to see the cheesiness (probably the only time I don't want to see it) of acting that many independent Christian films show.

2) The amount of plot dedicated to God. These are Bible based movies. So I don't need a 90 minute movie dedicated to sex and politics. I want some theology in there. I want an all powerful God to be present in the story. Save the debate on if these stories happened or not for a different film and just make a movie close to the stories in the Bible. You don't have to include everything, but throw some God in there and have it not go against what the Bible says. So if God is given Moses the Commandments I don't want Moses to then tell the people that these are just "suggestions" God gave him.

3) Closeness to Biblical accounts. Like I said, I don't mind not including everything from the actual story, but I don't want things added just to try and make the story more interesting. If this movie didn't show the adultery with Bathsheba that would have been fine. However, I don't want to see Jesus soaring through the clouds like Superman, just to make it more interesting.

The list above is listed from least to most important and the scale of judgment is from 1 to 10.

1) The actors did a fairly decent job at portraying their characters. However, because the Biblical account is much different than the way these characters acted, they lost a lot of points.

2) For a movie that didn't deal too much with theology this movie held up well in showing the presence of God in the character's lives. You have the visitation of God and bestowing Solomon with wisdom in there. You also have bad things happen to Israel as a result of Solomon's sins. My favorite example would be when the architect of the Temple asks Solomon how can God live in a place made by men if God is everywhere. Solomon uses his godly wisdom to answer the question splendidly. I was really surprised this was included in the movie since it's more theology based than anything else. You'll have to watch the movie to find out the answer.

3) This was the big downfall of the movie. The main problem being the over focus on the historically unknown relationship between Solomon and Sheba. The Bible dedicates only one passage to it and it's just about how the news of Solomon's wisdom reached so far and wide that even the Queen of Sheba heard about it. However, in this movie, they have a romantic relationship and even father a child. I think this was a bad use of liberty to take from such a small passage. The biggest problem with this movie was Solomons character himself. I didn't like how they showed him going from a wuss to a tyrant a lot of times. Very little focus was given on his closeness to God or godly spiritual matters. I agree that Solomon did a lot of the bad things this movie shows, but his character is so unlikeable in the 2nd act of this movie it's hard to even root for him or even like him. Not only does he constantly switch from wuss to tyrant a lot but he's also shown to be harsh and manipulative. While I don't think there's anything wrong with showing some of this, it just seemed that most of the movie was dedicated to showing the bad side of Solomon. Lastly, the way Bathsheba is talked about in the Bible is not at all how she was portrayed in the movie. There were other flaws, but I'll just stop there.

Overall, not a bad flick, but "Joseph" is still number one.
Posted by Film Geeks at 12:45 AM

A little late here, but your review needs to be better-informed with some well-known historical background information.

"However, in this movie, they have a romantic relationship and even father a child. I think this was a bad use of liberty to take from such a small passage."

You imply here that the filmmakers came up with this embellishment themselves.

However, the alleged relationship between Solomon and the Queen of Sheba is actually a very old Ethiopian legend.

The 700-year-old book "Kebra Nagast" had an account of their pairing, and the Ethiopian imperial dynasty, which was in power all the way up to 1974, claimed descent from Emperor Menelik I, who was supposedly the son of King Solomon and the Queen of Sheba.

This legend clearly has no basis in the Bible, but it shows that the idea of a romance between Solomon and the Queen of Sheba pre-dates this "Solomon" movie by many many centuries. So the filmmakers were not merely 'taking liberty from such a small passage' by depicting the relationship.

The romantic relationship was also depicted in the 1959 movie "Solomon and Sheba", starring Yul Brynner. In that film as well, the queen became pregnant with Solomon's son.

So, in summary, even though the romance has no basis in Scripture, the producers/writers/etc. of this "Solomon" movie did not just make up the idea on their own. The liberty was actually taken hundreds of years before this movie, and there is a large cultural tradition based on it, in Ethiopia. Your review should have acknowledged this, even in passing.

Please amend your review so that your readers will understand this historical background.

Perhaps you could also state your thoughts on embellishing Biblical movies with extra-Biblical sources, like C.B. DeMille did by consulting Philo, Josephus, and the Midrash for "The Ten Commandments".

Since you never replied to my comment, I will assume that you agree with it.

Unfortunately, I notice that you still have not corrected your review based on the cited historical information.