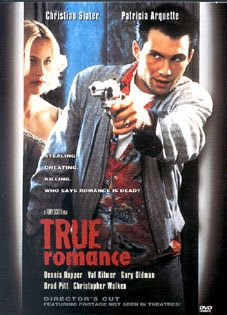 I'm a big fan of pretty much everything Quentin Tarantino does. I think his best works are those that he writes and directs himself. When this occurs you have some really great dialog and action in a movie. I love conversations about random but interesting things (like Royale with cheese in "Pulp Fiction" as one example). However, when Tarantino is just writing the script you still have a decent movie although I think you loose some of the vision of the script.

Through and through you have a star studded cast and crew. First of all the director is Tony Scott who has done some amazing work since 1993 (the year this movie was made) as well as after. Before this he directed such greats as "Top Gun", "Days Of Thunder", and "The Last Boy Scout". After this movie he took on some greats such as "Spy Game", "Man On Fire", and "Enemy Of The State". Scott is a master director with a craft for action mixed with drama and some thriller. I wouldn't consider this film to be in his top five, but with the script he has to work with, he does a great job of showing us a great, early Tarantino storyline.

If you like casts that just has a plethora of stars in it, this movie is for you. To name just a few you have Christian Slater and Patricia Arquette as the main characters; Val Kilmer, Brad Pitt, and Samuel L. Jackson as barely there characters; Dennis Hopper, Christopher Walken, Gary Oldman, Tom Sizemore, and James Gandolfini as some great supporting cast. With exception to the barely there characters, everyone in this movie is just over the top in their quality of acting.

You can clearly tell this is a Tarantino story when you hear the storyline. Clarence Worley (Slater) gets hooked up with a hooker named Alabama Whitman (Arquette) for his birthday. He has such a great time with her at the movies and talking to her, as well as the sex; that he marries her. In order to make sure, he has Alabama all to himself;Clarence, with the help of his guardian angel, Elvis (Kilmer), decide that he must kill her former pimp, Drexl Spivey (Oldman). Clarence kills the pimp and tries to take all Alabama's stuff with him but he grabs the wrong suitcase and later finds out that he's got half a million dollars in coke...and I'm not talking cola! With the help of his dad (Hopper), the two love birds head to Hollywood to offload the coke, make some quick cash, and go on their honeymoon. However, since Drexl was just a pimp and a pusher of sin, the devil doesn't let his merchandise go. Vincenzo Cocctti (Walken) is sent as the head of the clean up crew along with Virgil (Gandolfini) to get the coke back and make sure the Clarence and Alabama pay.

Like the title says, this is really a romantic story. Slater and Arquette do a great job at showing the chemistry between their two characters. You feel a lot of love coming from them. Arquette, in my opinion, gets the most number of chances to shine. Her character is not one who is just reacting shyly to the new situation she's involved in, she's taking the bull by the horns and making the most out of the situation she's in. She also has a great fight scene with Gandolfini that blows my mind. In that scene, her acting was superb. That isn't the only great action scene, there's one towards the end that involves a drug deal, the mob, and the cops in one of the best shoot outs I've seen in the 90's action genre. Tarantino also has some great movie dialog in his movie and I just love seeing that as both a fan of movies and of Tarantino. From these lines you clearly see the love that Tarantino has for movies. Hopper and Walken have a great scene together and they both have those somewhat crazy roles the actors love to take. I really don't know why Brad Pitt or Val Kilmer are in this movie. Pitt plays a few scenes where he's just a stoner and Kilmer plays a few scenes where he's angel Elvis but you never really get to see him. I didn't really understand the Elvis connection and it was distracting from the rest of the story. I was worried about the ending but is done wonderfully and it's great to see a movie that was early in Tarantino's career.
Posted by Film Geeks at 1:47 PM